Those of you who follow this blog know that I am a fan of Acer's Timeline series of laptops. They combine the attributes of being substantially lighter than other laptops in the same class and having longer than the average battery life at a decent build quality at a mid-level price. 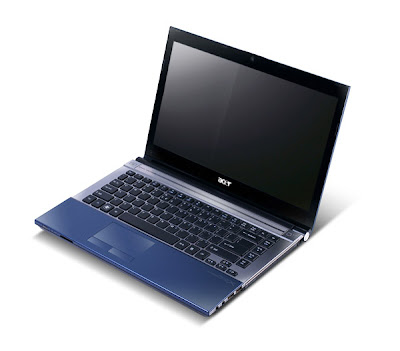 The first thing you will notice about the new Timeline is the its new garb. Instead of the business like subtle black and grey finish of the first and second generation Timelines, which were perfect for business users, the new Timelines come in a dark blue and silver case. It looks like the Timeline series is headed in a new direction, targeting gamers and the younger generation. The aluminum accented lid is colored in what Acer calls "Ice Blue" and the keyboard area is accented in Ice Blue and silver. Acer also has switched to a more conventional chiclet type keyboard from the older island type keyboard.

Inside you will find a Sandy Bridge Intel Cotre i5-2410M processor running at 2.3GHz, and which can turbo boost up to 2.9GHz when needed. This is a dual core processor, with a 3MB cache. Along with Sandy Bridge, the new Acer 4830TG now has a USB 3.0 port. One other major change from the previous model is the Nvidia GT540M graphics used, instead of the ATI Graphics in previous models. The Nvidia GT540M comes with 2GB of RAM and brings Optimus technology (graphic card swithcing) to the TimelineX, which I think is a fair bit smoother than the ATI solution.

The Acer 4830TG offered in the Philippines is also equipped 3MB of RAM and a 750GB hard drive, more than the previous version. What has not changed is the price, still being priced at a decent Php46,990.

Competitors. Looking at the other options available, one interesting alternative to the Acer 4830TG is Acer's own Aspire 4750G-2412G64Mn. The two have similar specifications, with the Acer 4750G coming in at Php12K less.

What do you lose for the lower price. On the specs sheet you lose 1GB of RAM, 110GB of hard drive space and Windows Home Premium. The Acer 4750G-2412G64Mn come with a Linux operating system installed. You also do not get the new blue and silver garb with the chiclet keyboard. The Acer 4750G still has the older island style keyboard.

All in all, I think the additional Php12K is worth it.

The Acer 4830TG is a nice solid release. I would have preferred a black and grey finish, but that kind of thing is subjective. If you are looking for portable and powerful, this a very good choice.