App stores and markets, by the numbers 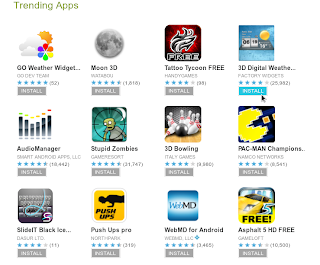 App Store. Apple announced in July 2011 that over 15 billion apps have been downloaded from its iOS App Store by the more than 200 million iPhone, iPad and iPod touch users worldwide. The App Store offers more than 425,000 apps with over 100,000 native iPad apps.

The figure is both impressive and underwhelming. Fifteen billion apps divided by the more than 200 million iPhone, iPad and iPod touch users means that on the average an iOS device user downloads 75 apps. I am not sure whether that figure includes multiple downloads on single device, or by a person upgrading from one device to another. In any case 75 downloads per device, with over 100,000 to 325,000 options available means that a iOS user only 0.023% to 0.075%, or less than one tenth of one percent, of the available apps in the market.

Fifteen billion apps divided by the more than 425,000 apps means an average an app is downloaded an average of a bit over 35,000 times. Apple's App store does not tell us how many times each App has been downloaded, but Rovio Announced was back in December 2010 that it iOS version had been downloaded 12,000,000 times. That is 343 times more than the average. This should mean that there are apps which are on the other end of the spectrum, having been download 343 times less than the average, meaning between 1,000-2,000 downloads.

From a revenue standpoint Apple has paid out over 2.5 billion US dollars in revenue. That is on the average US$5,882 per app in Apple's App Store. Since there are free apps, and computation  would include free apps we should take them out of the equation. As a rough estimate, paids apps on the average have probably earned about US$10,000 to US15,000 per app. Take this as a very inaccurate guesstimate.

The Android Market does give you information on the number of installs.
These four apps alone account for somewhere between 80,000,000 to 250,000 million downloads. The Facebook App is downloaded at 2000 times more than than the typical app. Again this means that there are a lot of Android apps downloaded just 1,000-2,000 times.

What does this mean? I do not know how many apps Android users download. Personally I have downloaded over 100 apps in five months (some came pre-installed but have updated by me so they count as a download). This  puts me above the iOS user average. I have browsed through maybe 1,500 apps in five months. Lately, I just check the top and trending app charts. I have not seen more than 1% of the apps on the Android Market, and the number I have tried is about 1 app in every 2,500 available.

I have kept 47 of the apps I downloaded, of which 42 came from the Android Market, four from the HTC Hub and one from Gameloft. My biggest source of Apps is from Google itself with twelve of my apps being developed by Google.

Of my 47 apps, after checking, I really have never used nine of them except to try them a decide that I might need it sometime in the future. Another seven I rarely use and would not bother getting them if they were paid. Paid apps, I bought four and made a donation for a fifth. I might buy two of the apps which I have free versions now.

Note ColorNote Notepad Notes, Wopnersofts Unit Converter (it also converts currency) and SpeedSoftware Explorer are the free (and add free) apps I have kept that I would gladly pay for. Sorry for the plug.

In the end, I do not think we really need bigger and bigger apps stores. There are already too many "me too" apps. We will always need new apps, but hopefully with something different to offer. Not more alternatives to do the same thing. We also need a better way to find quality apps. With the large number of apps, I wonder how many jewels are lost in the haystack.