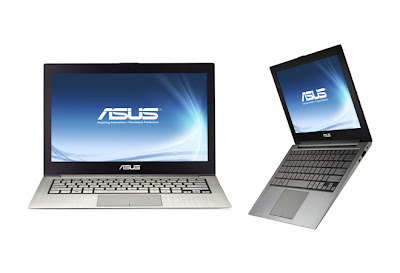 Asus Philippines has announced the official pricing for its Intel Ultrabooks, which Asus calls its Zenbooks.  The 13.3-inch Asus Zenbook UX31 is priced at Php59,995. Only one configuration for the Asus UX31 will be offered in the Philippines.

The main differences are that with the Asus UX31  you get a mini-HDMI port instead of a Mini Display Port on the MacBook Air, USB 3.0 instead of Thunderbolt and Windows instead of Mac OSX. I would say the Asus UX31 is the more relevant machine to most users as HDMI and USB 3.0 are more useful than a MDP and Thunderbolt. The operating system is a matter of personal preference.

The Asus UX31 has a 1600 x 900 pixel resolution screen, which has a higher resolution than the 1440 x 900 screen on the 13-inch MacBook Air.  The Asus UX31 also sports better speakers and audio. The Asus UX31 does not have a back lit keyboard, but does give you nice aluminum keys which should hold up better to wear and tear than

Price. At Php59,995 is Php5,995 cheaper than the similarly equipped 13-inch MacBook Air. The UX21 also comes with a free sleeve, maybe another Php800 in value.  All in all, the Asus UX31 is a better bang for the buck option than the 13-inch MacBook Air offerings, with one caveat, the track pad issue below. Still the Asus UX31 is not cheap, and I do not see it being a big seller in the Philippines.

Others. Every review of the Asus UX31, reports a glitch with the track pad which leaves it overly sensitive. Before buying one, make sure this glitch has been resolved.
Posted by Unknown at 12:30 AM