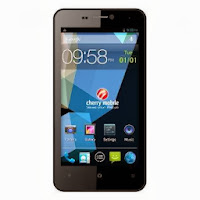 The Cherry Mobile Apollo could be the best phone ever released by the company. I say this because I think this low cost offering will stay relevant for a long time. The biggest drawback with buying a low cost device is that it tends to feel old fast, as newer low cost models are offered. When friends ask me if a low cost device is worth it, basically I look at it this way: You can buy one expensive device and keep it for two years, or a lower cost phone and replace it yearly. After one year, you get a new phone, new warranty and a new battery and can still spend less than investing in one high end model. If you bought a Cherry Mobile Flare or Titan last year, you are probably itching for an upgrade right about now.

The Cherry Mobile Apollo is changing my perception on this. It is a low cost device that you probably will keep for two years.

The first thing going for the Apollo is the display. What is the perfect sized display is subjective. But if you, like me, are the type who likes to be able to use a phone with one hand, the Apollo is a good size. At 4.5 inches, a 720p display is fine. That is a sharp 326 pixel per inch display. There really is little point in having a 1080p display on a phone with a 4.5-inch display. So the displays of future offerings may improve over time with better viewing angles or Gorilla Glass. When this happens the Apollo will not feel old, since it has the most important characteristic in this regard. In terms of sharpness of the display, this is probably as good as it gets on 4.5-inches.

As for RAM, the Apollo has 1GB of RAM. I am guessing,  this will be standard for entry level phones for the next two years. By the time you see plenty of low cost Androids with 2GB of RAM, your Apollo will probably be on its second birthday.

The MediaTek MT6589 chipset which powers the Apollo will probably be found even on the cheapest phones within six months. Still it should be powerful enough to keep you happy through two years of ownership. As processing power increases it becomes less and less relevant. Only hard core gamers will find that the Apollo will be wanting in power during the next two years.

And that is what makes the Apollo the best phone Cherry Mobile ever released. At Php6,999 it is a low cost phone, with just enough hardware to make it viable for two years of ownership.

*While specifications posted say the battery is a 1800 mAh unit, early buyers report that the battery supplied was a 2000 mAh unit.