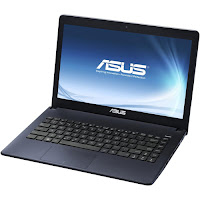 With two versions of the 14-inch Asus budget thin and light in the market, which one is the better choice? You have the AMD powered Asus X410U and the Intel powered Asus X401A. Except for the processor and graphics both have identical specifications.

The Asus X410U is cheaper for a reason. The performance of the two in terms of processing power is rather large

Basically, the AMD version cost 4K less than the Intel version, but overall provides almost a third of the processing power. The AMD E2-1800 does have a good graphics chip which can play Full HD video with ease.