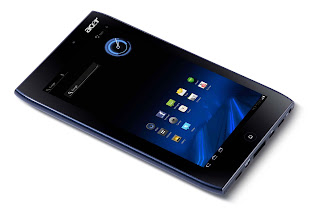 The  Acer ICONIA TAB A100 which is priced at Php17,900 with its primary is the 7-inch Samsung Galaxy Tab, priced at around Php2,000 less. Another 7-inch alternative is the QNX powered BlackBerry PlayBook which is price Php6,000 more.

The Acer ICONIA TAB A100 has the same 600 x 1024 resolution as the Samsung Galaxy Tab, and actually has less internal storage at 8GB versus the 16 GB found in the Galaxy Tab. The advantages of the Acer ICNONIA TAB A100 is that it is a Nvidia Tegra 2 system with a dual 1GHZ Cortex A9 processor and a Ultra Low Power GeForce GPU backed by 1GB of RAM. This roughly gives it twice the punch of the Galaxy Tab and enough power to play the latest games being released. Another advantage over the Galaxy Tab is the the Acer ICONIA has HDMI out so you can plug it in to your LCD TV. It also comes with the expected MicroSD slot allowing you to expand storage to up to 40GB It also has

It is the best 7-inch tablet in the market for those who do not need 3G connectivity. That being said, it does not have all that much competition either.