Why you won't be reading about Sony-Ericsson Xperia's here anymore 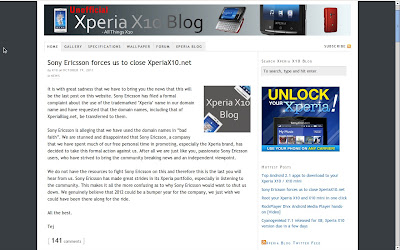 We got this sad piece of information from TechCrunch: Sony Ericsson Forces A Fan Site Into Submission.

Sony Ericsson has sued two Sony Xperia fan sites, XperiaX10.net and Xperiablog.net.  The owner of the sites has decided not to fight the issue out, after for most of us this is a hobby. Here is his statement:

It is with great sadness that we have to bring you the news that this will be the last post on this website. Sony Ericsson has filed a formal complaint about the use of the trademarked ‘Xperia’ name in our domain name and have requested that the domain names, including that of XperiaX10.net, be transferred to them.

Sony Ericsson is alleging that we have used the domain names in “bad faith”. We are stunned and disappointed that Sony Ericsson, a company that we have spent much of our free personal time in promoting, especially the Xperia brand, has decided to take this formal action against us. After all we are just like you, passionate Sony Ericsson users, who have strived to bring the community breaking news and an independent viewpoint.

We do not have the resources to fight Sony Ericsson on this and therefore this is the last you will hear from us. Sony Ericsson has made great strides in its Xperia portfolio, especially in listening to the community. This makes it all the more confusing as to why Sony Ericsson would want to shut us down. We genuinely believe that 2012 could be a bumper year for the company, we just wish we could have been there along for the ride. 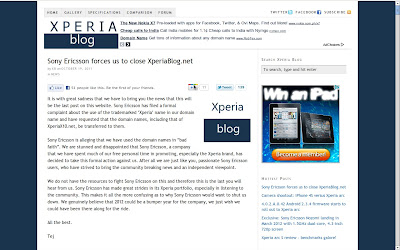 If Sony-Ericsson is not fond of the free publicity it gets from blogs and fan sites, I am very willing to accommodate them. We wont be using the word Xperia in this blog after this article, hence we wont be covering any products which have that as part of its name.


Update. XperiaX10.net and Xperiablog.net. are back!


We are delighted to report that we have come to an agreement with Sony Ericsson that means our two affected blogs (XperiaBlog.net and XperiaX10.net) will remain open. The downtime we have experienced since October 18th was unfortunate but necessary whilst we were in communication with Sony Ericsson to resolve this matter.


Sony Ericsson contacted us to let us know that it appreciates our support of its products and the efforts we have put into developing these blogs. They also appreciate the engagement of blogs like these and consumers who visit these sites. Sony Ericsson dropped the initial complaint and we have instead reached an agreement so that we can keep the domain names and continue to work on the site. Just to reassure you, there will be no change to our editorial independence under this arrangement. We will continue to give you our honest opinion about Sony Ericsson’s strategy and its smartphones.

Alls well that ends well.
Posted by Unknown at 7:17 PM