Can Globe Telecom's BlackBerry Plans save the BlackBerry 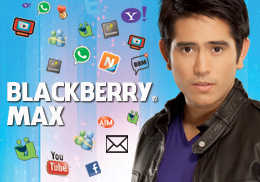 In the United States and Europe, BlackBerry market share is being eroded by Android, iOS and to a smaller degree Windows Phone devices.

In other Asia and the Philippines, BlackBerry has a very small market share, but it is actually on the rise. The BlackBerry OS is clearly outdated as compared to Android, iOS and Windows Phone, and even the latest BlackBerry hardware barely catches up to the lower end Windows Phone devices.

But Globe Telecom is giving BlackBerry an ace in the sleeve. Globe BBMax is a Php599 a month all-unlimited data plan for BlackBerry devices. This data plan offers unlimited surfing, IM, email, social networking (on the BB APN) plus downloading and streaming (on the Internet APN) wherever you go. This service is available to both Postpaid and Prepaid subscribers.

Personally, if I was not locked into a data plan for my Android phone I would seriously consider Globe BBMax plan. The devices meet my needs, I get access to BBM and save 10K over two years. What do you think? Is this enough to make BlackBerry mainstream in the Philippines?
Posted by Unknown at 1:13 PM