A few months ago, Globe Telecom offered the Globe Cloudfone Ice at Php4,990 on a pre-paid kit. While that unit is not available now, you can still a decent Smartphone for under 6K.

@Php5,990 - Samsung Galaxy Y - Nothing interesting, but it works. The Samsung Galaxy Y is an Android smartphone with a 3-inch capacitative touchscreen. We look at it as more of a starting point, rather than a recommendation.

Basically, it will do the job. It has WiFi and HSDPA connectivity. Pair it with a fixed volume or unlimited data plan and it will get you your email, keep you up to date with the news and weather, keep you connected to your social networks and allow you to use you instant messengers, give you access to Google Maps, Navigation and Places. Basically, it will do all the serious smartphone stuff well enough.

The downside is the screen resolution. Its 3-inch screen is small and has a low 240 x 320 resolution. This will result in some compatibility issues with some Android Market apps (mainly games) and overall does not make web browsing on the phone all that much fun. The 2 MP fixed focus main camera really is of little use.

Still, at Php5,990 it works, and you can get if from the carriers free on a two year Php350 (or less) per month contract. At that price it is hard to complain.

@Php7,490 - Smart Netphone 701 - This is where you should start. The main issue about the Smart Netphone is that it is locked to Smart. If you do not like the Smart network, than this phone is not for you. If you are on a budget, this is the best way to go.

It has one thing going for it, and it is a big one thing. The Smart Netphone 701 has a large iPhone size 3.5-inch screen with a high-end phone like 480 x 800 resolution.

If your main purpose for a phone is calls, text, email, social networking, instants messaging and web browsing this phone will do all those things fine.

At Php7,490 this ageing phone is still worth the money, mainly because of the screen. Having dropped Php2,500 in price helps keep it a great choice at this price point and pretty much knocks our a lot of the competition.

You also get one, on a Php500 a month plan on a two year contract from Smart Communications. 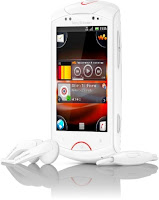 @Php10,550 - Sony Ericsson Live with Walkman - 1GHz Snapdragon inside. Late last year, Sony Ericsson (now just Sony) released three low priced Android smartphones. The Sony Ericsson Xperia Mini, the Mini Pro with a slide out QWERTY keyboard and the Live with Walkman. These three phone have similar specifications, which is much better than you would expect for around 10K. You get a decent 320 x 480 resolution screen, 1 GHz processors, 512 MB of RAM, 320 MB or more of internal storage (expandable via MicroSD card), a 5MP autofocus camera with a flash and the other usual HDSPA, WiFI and Bluetooth connectivity.

Except for the size of the screen, screen resolutions and internal storage these phones have specifications more like mid-level Androids.

Our favorite is the Sony Ericsson Live with Walkman since it has the largest screen of the three at 3.2-inches can be found for as low as Php10,550 with a official warranty from Sony.

@BlackBerry - Globe BlackBerry Max 599 with a free BlackBerry 8520 - Dated but if you need to avail of BlackBerry Services. BlackBerry's have always been expensive, and that seems even more true today. At less than Php12,000 the only unit we found that fits is the circa 2009 BlackBerry Curve 8520.

With a 2.5-inch screen, a 2MP camera, and still using GPRS and Edge instead of HSDPA for connectivity, a BlackBerry 8520 will still cost you at least Php9,100.

Not having even seen a Lenovo A60, which has a larger 3.5-inch screen and lower Php7,900 price we are not sure which of these two dual sims phones is better.