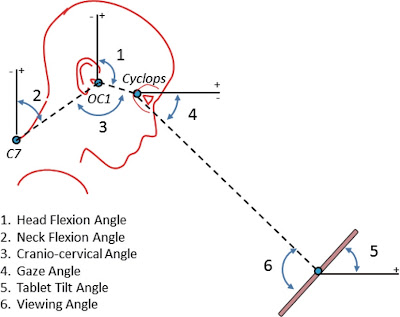 Ever since electronic devices became a near addition. Television sets were bad for our eyes, audio music players detrimental to our hearing, keyboards and mice were the hair bringers of repetitive strain syndrome, and heavy laptops brought painful shoulders because of the big bag syndrome. Now tablets have a more ambitious target: Your vertebra.

A study for the National Institute of Health was done by Harvard's medical and public health schools, with input from a Microsoft researcher, that examines how healthy is our posture when we use a tablet, compared to the more traditional desktop or laptop computers.

Needless to say, after examining the stooped, wrinkled posture of 15 tablet users in four different usage scenarios, the researchers concluded that slates are the worst for your back, neck, and so on, compared to a desktop kit, and even to a laptop computer. The four usage scenarios were: a tablet in the users' hands, on the lap in a case, on a table in a case, and on a table in a case, but at a higher angle, suitable for watching movies.

x x x
he final recommendation is actually not a very typical way of utilizing your slate - at eye level and in a case that will keep it propped up to avoid unusual neck position...

It is going to be though keeping your 10-inch slate at eye level.


The same can be said for smartphones. Stooping over our hand helds for hours a day is equally harmful. Hold your device higher and keep as close to eye level as possible. Next time I get a phone, weight will be more of an issue. Lighter devices are easier to keep at eye level.