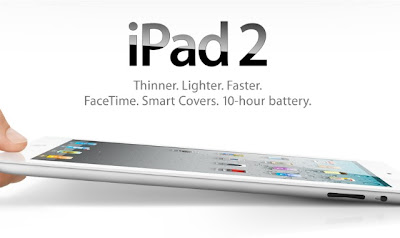 Techie.com.ph reports that the Apple iPad 2 will be on sale at the local Power Mac Center by April 29. Retail price is expected to be at approximately Php24K for the 16GB WiFi only model. Same as the price at the local launch of the original iPad in the Philippine in December 2010.
If you are in the market for a 10-inch tablet, this is the one to buy.

Update: And Yugatech reports... that the Philippine iPad 2 release, is on hold until further notice.

Update 2: Ang Yugatech reports... that the April 29 launch date is confirmed.
Posted by Unknown at 9:37 AM