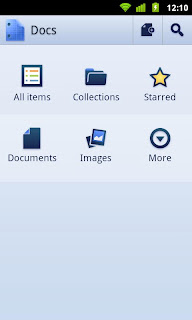 One thing which has been missing for a long time is a official an Google Android app for Google Documents. We have had GDocs ad My Docs - Google Docs which allows you to access your Google Documents account and that lets us access and edit your documents and spreadsheets from your Android smartphone. But the has been no official Google app. 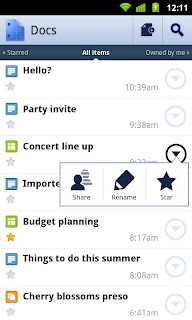 Google has released their own official Docs app. The app, called Google Docs is compatible with Android 2.1 software and above. You can upload files from your smartphone, open attachments from email, and take a pictures of a book or magazine and upload the text from it as an editable Google Doc. That last feature still appears to need some work. The app has  a widget that includes buttons to create a new document or launch a starred file. 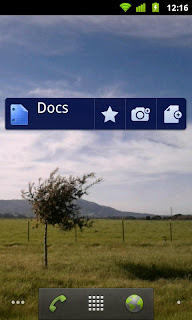 Head on to the Android Market and give it a try... like more Android apps, it is free.
Posted by Unknown at 8:08 AM