If you are in the market for an 11.6" ultraportable notebook, there are two models which we think you should consider: the 11.6" Apple MacBook Air and Acer Aspire TimelineX 1830T. While the Acer was released internationally earlier, both the Acer and the Apple became available in the Philippines only last month. 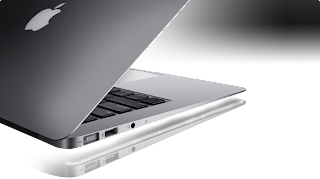 Size and weight. An 11.6" ultraportable notebook is selected because size and weight are the primary consideration without sacrificing the size of the keyboard. An 11.6" laptop will have a 100% sized keyboard. The MacBook Air's dimensions are 11.8 x 7.56 x 0.11-0.68 inches and it weighs in at an amazingly light 2.3 pounds. It is trimmer and lighter than any 11.6" laptop that we can recall. The Acer's dimensions are at 11.2 x 8 x 1-1.1" and weighs in at 3 pounds. The Acer is thicker and heavier, but either is easy enough to slip into the suitcase and neither is a burden to carry around. The Acer is  still a small and light notebook, it simply cannot match the MacBook Air in this category. We give Round 1 to the Apple. 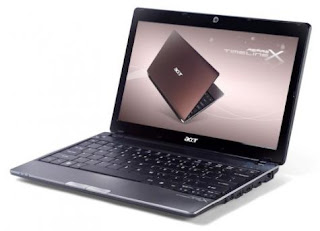 Performance. The Acer Aspire TimelineX 1830T currently being sold in the Philippines is powered by a Intel Core i3-380um processor running at 1.33GHz with a 3GB cache. The Apple MacBook Air 11.6" has a slower Core2 Duo 1.40GHz with a 3MB cache. The improved architecture of the Arrandale processor gives that Acer a more than 20% advantage on processing power. The MacBook Air has the advantage in graphics with an Nvidia GeForce 320M with 256MB of shared memory. While the Acer has a  decent Intel video card, Intel HD  Graphics  with 128MB of dedicated memory, this can only provide a third of the power of the Nvidia GeForce 320M. Aiding the Apple in the speed category is that it uses an SSD drive which results in faster hard driver access. This round ends in a tie.

Neither the Intel Core i3 powered Acer or the Apple is fast in current standards but both are sufficiently capable for what a person would normally do with an 11.6" computer.

Storage. The Acer TimelineX has a conventional 250GB hard disk drive. The MacBook Air has a more modern but much smaller 64MB SSD drive. After installing the operating system, this leaves you with a bit more than 40GB. This is plenty of space for your productivity software, documents and spreadsheets. It will get filled up pretty fast if you install games and use it to store picture, videos and music. A 128GB SSD drive is available for the 11.6" MacBook Air, but this costs Php10K more. That is a lot to pay for 64GB more hard drive space.

The SSD also has the advantage of being less prone to failure in case you use the notebook in a moving vehicle. While we love SSD technology, we do think that people will find 64GB on the small side, and give this round to Acer.

Ergonomics. Both the MacBook Air and the Acer TimelineX have fine keyboards, the Apple keyboard being a bit more comfortable to use in our opinion. Where the two vary widely is that the Acer has a rather small 2.5 x 1.5" touchpad while  the MacBook Air has a generously sized 4.2 x2.6" touchpad. Both touchpads support scroll and zoom functions, but this feature is more useful in the Acer TimelineX. We give, this round to Apple.

Fit and finish. Apples are well built, and the 11.6" MacBook Air is no exception. It has sleek sliver like aluminum chassis. It is not adorned by intakes and vents, the exhaust being hidden discretely behind the lid. All this makes it the most attractive ultraportable we have ever seen. Go out and see one for yourself, pictures do not do it justice.

Unfortunately, the same thing can be said about the Acer Aspire TimelineX 1830T. While the palm rest has a brushed aluminum finish, the lid is made of plastic.  Basically, it looks a netbook. The rest of Acer's TimelineX series have brushed aluminum lids. It would have been nice if the 1830T was outfitted with an aluminum lid. Thankfully the plastic lid is well-designed, in that its textured finish is resistant to finger prints. The bezel surrounding the display is glossy black, and this does pick-up fingerprints and scratches quickly. Pressing on the lid with a moderate amount of pressure results in some distortion in the display. A slightly thicker lid would have been more desirable.

Other differences. Both laptops have 11.6" 1366 x 768 LED screens. Both have b/g/n wifi. The Acer has an HDMI while Apple has its Mini Display Port. Acer has 3 USB ports, while the Apple only has 2. The Apple does not have a Ethernet port, so connecting to the Internet cannot be done through a LAN cable. The Apple is simply too slim to accommodate an RJ-45 connector.

Cost. The word value for money and Apple really do not belong in the same sentence if you are looking purely at specifications. When you factor in the build quality, the 11.6" Apple MacBook Air is worth its Php51,990 asking price. The Acer is priced a lot less, at Php32,500. Not bad for ultraportable with an Intel Core i3 processor. There is no winner in this round. Both are well worth the asking price.

Conclusion.  Which one is better? We think either one is a good choice. It really depends on your set of priorities. Neither is "perfect." If I were to redesign the Acer, I would push the battery back to increase the size of the touchpad, give it a stiff aluminum lid and a matte finish on the bezel. As for the Apple, I would make it a bit thicker and heavier and give it a bigger battery and larger hard drive.

If I were buying one of these machines, I would buy the Acer. It is cheaper, has a longer battery life, a faster processor and its video capabilities are sufficient. The MacBook Air's advantages are not so clear-cut, but its svelte aluminum ultra-thin case is the kind of thing that results in impulse-buy decisions.