Have you checked you Mac for the Flashback Trojan already?

The Flashback Trojan infected 670,000 computers worldwide, 98% of them running Apple's Mac OS X. It appears that the number of infected computers is down to 270,000 (PC Mag, quoting Symantec).

Apple is still coming out with a removal tool, but there is no need to wait for that. If you still have not checked your Mac I recommend you: 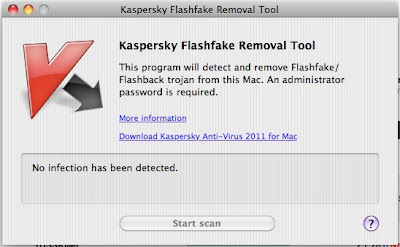 Do you part in bringing down the number of infected computers to 0.

Update: The official Apple Flashback Removal Tool is now available. Just update your Max OS X 10.6 or 10.7 and that is that.
Posted by Unknown at 5:30 PM

Email ThisBlogThis!Share to TwitterShare to FacebookShare to Pinterest
Labels: Odds and ends, Software and Applications