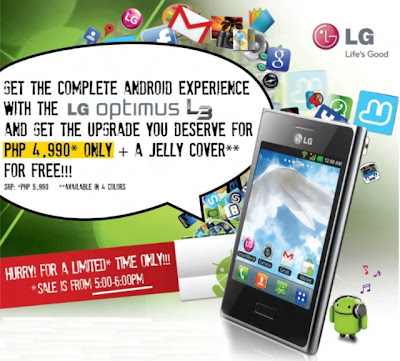 LG Optimus L3. LG is launching its entry level Optimus L3 this Saturday, April 21, 2012. This entry level phone competes directly with Samsung Galaxy Y. The Optimus L3 has more internal storage than the Samsung Galaxy Y, which is important since not all apps can be installed in the MicroSD card. It also has a better camera and larger battery than the Galaxy Y. The Galaxy Y has faster 3G connectivity. With a suggested retail price of Php5,990 its prize is the same as the Galaxy Y.

Quick specs:
Like the Samsung Galaxy Y it has a low resolution 240 x 320 pixel display. We were hoping that 2011 would see the end of Android phones using this resolution. A fair number of Android apps do not run or do not run optimally under that screen resolution. Android was originally developed to run on displays with a 320 x 480 resolution.

Launch hour sale. From 5 PM to 6 PM on April 21, 2012 LG will be offering the LG Optimus L3 for a discounted price of Php4,990 with a free jelly case at the LG Concept Stores in the Mall of Asia and Megamall. Given problems that have happened in past launch day promo sales, I do not want to make any representations about this one. Those interested can download the full promo mechanics at this link.