Which smartphone have the best battery life?

GSMArena has been doing comprehensive tests of smartphone battery life. Removing units not officially available in the Philippines, we looked at the top 5 in each category. We did keep one unit not yet available in the Philippines, the HTC One S so that you could compare the performance of Qualcomm's S4 which its processor built using the 28 nm process, and we do expect it to be coming soon.
Talk Time - Top 5 smartphones
The Note has a massive 2500 mAh battery, so I am not surprised to see it top the list. The One X does very well too, which is the effect of having a low powered companion core (500 MHz fifth core) which does the work when quad core power is not needed. HTC One S with its 32 nm process shows its efficiency. The two popular phones of 2011, the Samsung Galaxy S II (8:35) and Apple iPhone 4S (7:41) did not fare well, with the Galaxy S II giving one hour less talk time than the HTC One S. The iPhone 4S gave two hours talk time less. The Galaxy S II and iPhone 4S have processors built on the 45 nm process.

Web Browsing - Top 5 smartphones
Notably, all the phones that made the top five list have 3.7-inch displays or smaller, except for the 4-inch Super AMOLED equipped Samsung Wave 3 S8600.


SD Video Playback -
Four of the top phones in SD video playback use AMOLED displays. The Apple iPhone 4S which was second on the list has a substantially smaller 3.5-inch display than the next smallest phone on the list, the Nokia N9 with its 3.9-inch display. Notably, the Samsung Wave 3 S8600 would be sixth on the list, at 7:52.

Overall, the Samsung Wave 3 did a good all around job in terms of battery life. 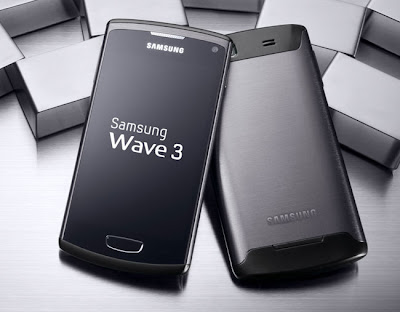