Samsung has officially announced its new Android flagship, the i9300 Galaxy S III. The Galaxy S III is a massive phone and its main competition is well regarded HTC One X. In looking at how successful the new release is, a direct comparison to the One X cannot be avoided. This comparison will take a look at the hardware (with the exception of cloud storage which we will include in this comparison), and we wont be looking yet at the accessories (wireless charging) and numerous software tweaks and features Samsung added to their new flagship.

Display and case. As rumored, the Galaxy S III has a large 4.8 inch Super AMOLED display with a 720 x 1280 pixel resolution. What many will find disappointing is that it is of the pentile matrix variety and not a Super AMOLED plus display like that Samsung P6800 Galaxy Tab 7.7. I personally have no problem with a pentile matrix display being satisfied with the similar display found in the Samsung Galaxy Nexus.

The Galaxy S III display is protected by a new Corning Gorilla Glass 2 which allows the glass to be 20% thinner without sacrificing durability. This supposedly enhances the quality of the image and has better touch responsiveness.

The case of the Galaxy S III has a plastic polycarbonate case, like the One X and Nokia Lumia 800 and 900. The Galaxy S III case has a glossy "hyperglaze" coating which makes it look more "plasticky" than the One X or Lumia's. While plastic is a very good material to build a phone from as it does not interfere with radio signals and resist shock well, many people were hoping for something built from more exotic materials. The Galaxy S III is available in a dark blue and white case.

The case design itself it like that on the Galaxy Nexus, with the curved sides making the large case friendlier to the hand. It is not as stylish as the Galaxy Nexus case, the Galaxy S III case being a simpler design.

In terms of case design, the Galaxy S III did a better job with housing the camera which sits almost flush in the case and does not stick out as much as the camera One X.

In terms of the display or the case, Samsung does not break new ground, and the 0.1 inch size advantage is not a killer blow. Many would actually prefer the One X's 4.7 inch IPS 2 display and the more stylish shape of the case.

Notably GSM Arena did not run the graphics oriented benchmarks, and those might give the Nvidia Tegra 3 some solace. But for now, its not looking too good for the Tegra 3 and the One X. 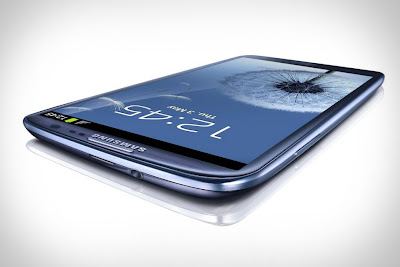 In order to further improve efficiency the new quad Exynos chipset can scale/reduce the voltage of each core and even power down cores when not needed. Samsung claims the new quad Exynos uses 20% less power than the dual core Exynos which was used in the Galaxy S II.
In addition, the Galaxy S III one upped the One X in battery size with a 2100 mAh unit, versus the 1800 mAh unit in One X. We will have to wait for GSM Arena's battery life tests, but it seems pretty certain that the Galaxy S III should do pretty well.

Storage. The HTC One X comes with 32 GB of non expandable internal storage. The Samsung Galaxy S III comes in three variants with 16 GB, 32 GB and 64 GB of storage expandable via a MicroSD card. Ultimately, you can get more storage on the Galaxy S III.

Camera. Samsung has retained an 8 MP camera with autofocus, LED flash, geo-tagging, touch focus functionality, face/smile detection, image stabilisation and 1080p video capture for the Samsung Galaxy S III. Some will be disappointed it is not a 12 MP unit. Personally, I do not buy into the mega pixel hype. Image quality is more important.

Like all the new Android 4.0 phones, you now have a fast focusing camera which can take up to 6 shots in one second on burst mode. Like the One X, you can take stills while recording video.

Verdict? It is too early to tell for sure as reviewers are still getting their review units now, but it does look like Samsung put enough into the new Galaxy S III to one up the HTC One X.