Microsoft Surface Pro - Not designed for you and me

The Microsoft Surface is a pretty interesting concept. Already available is the Microsoft Surface which is a Windows RT tablet powered by a quad core processor on a Tegra chipset. Available with 32 GB or 64 GB of internal storage, it comes to the market as a reworked Asus Transformer.

Basically, the Microsoft Surface mates a 10.6-inch tablet with a keyboard that doubles as a protective case. The entire package comes in at 1.95 pounds to 1.97 pounds which will give you 8-10 hours of battery life. The Microsoft Surface wont run traditional PC applications, but it does come with Microsoft Office. With prices, with a keyboard, starting at Php33,999 it is not cheap, but if you need MS Office, it is probably the the lightest most portable package that can run MS Office competently. 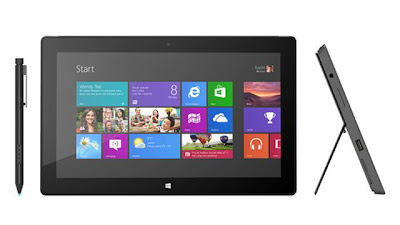 Yesterday, Microsoft announced the Surface Pro. This version of the Surface also comes with a 10.6-inch display, but this one runs a full 1080p resolution. More importantly this runs on a Intel Core i5 processor will be available with 64 GB and 128 GB of internal storage. Pricing starts at US$899, so we would expect it to hit local shelves bundles with a keyboard for over 50K. While I am assuming anybody who want's a surface will want a keyboard cover to go with it, I think that is a fair assumption.

Now, the Intel Core i5 inside sounds good, but the Microsoft Surface Pro tips the scale at about 2 pounds. With a Touch or Type keyboard cover, you are now looking at almost 2.5 pounds, pretty to close to the weight of a 11.6-inch MacBook Air which has the advantage of a larger screen. Battery life drops down to 4-5 hours. And the pricing takes it to MacBook Air and Ultrabook levels.

Unless for some reason you want to run traditional PC (x86) software in a tablet like form factor, there is no reason to buy a Surface Pro. While running all your old Windows apps sounds great, remember that traditional PC software is not touch optimized. Microsoft, recognizing that Microsoft bundled a stylus with the Surface Pro.

It should be a matter of time before the publishers of your favorite x86 software come out with touch optimized Windows RT versions (unless the platform is a complete failure). If Microsoft's plan pans out, all new software should become both Windows RT and Windows 8 compatible.

So why did Microsoft build the Surface Pro? The stylus and touch screen will appeal to some professionals who want a powerful but portable device from drawing, sketching a photo editing. For IT Managers of an enterprise with custom built x86 software, the Surface Pro serves as a transitional device which will allow the company to deploy Windows RT powered Surface devices together with Windows 8 powered laptops and desktops, with the new Surface Pro as part of the mix. In that sense, the Surface "Pro" is very aptly named.