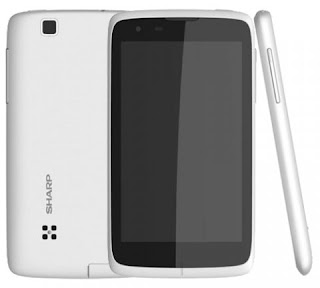 We already too a look at Sharp's SH631. The other smartphone Sharp is offering looks more impressive, bit only initially. The Sharp SH530U is a dual SIM Android 4.0 powered 5-inch smartphone with 16 GB of user available internal storage and a MicroSD card slot.

Inside you have the same dual-core 1 GHz ARM Cortex-A9 processor, MTKMT6577 chipset and PowerVR SXG531T graphics as the Sharp SH631.

This phone also runs on Android 4.0.4 (Ice Cream Sandwich) with a Sharp Feel UX UI. Like a Nexus phone is has soft keys on the display rather than dedicated buttons. However, it does not follow the standard Android 4 three key format, and instead displays four keys. The large 5-inch screen means a large 146.5 x 81 x 9.9 mm case which weighs in at a fairly hefty 168.8 grams.

It is not much of a camera phone though, with a 5 MP shooter with a flash. Still, the 5 MP unit is an auto focus camera with face detection and geo tagging.

I think I prefer the Sharp SH631, but the Sharp's SH503U offers a larger display, dual SIM capability and more storage for a lower Php12,990 asking price.