Is 2011 the year of the ChinaDroid army?

This article rambles a bit, so please bear with me. The year 2010 say Google's Android Operating System rise into prominence, and is poised to be the most common smartphone operating system in the world. For many a mobile phone manufacturer, Android can be credited with getting them back in the game. Google's Android O.S. reversed the flagging fortunes of Motorola, made HTC which used to exclusively manufacture only Microsoft Windows smartphones a tier one smartphone manufacturer, and is giving Samsung the needed boost in the smartphone segment to become the world top mobile phone manufacturer.
In 2010 we saw the March of the Android army. But Google's Android also poses a threat to the companies which rely on it so heavily. We have seen cheap China iPhone and Nokia phones for years, and many legitimate and interesting designs from smaller manufacturers like Huawei, ZTE and other OEM manufacturers. No matter how good these phones might look, or how good their hardware might be, in the end the relation of a Nokia N96 or iPhone 4 knock off might be, without a decent operating system under the hood,  the similarity would only be skin deep.
That is starting to change. Google Android is free license. It does not cost anything to put it on a phone. All you have to do is to build a phone with sufficient hardware to run it. While these 500-600MHz processors and higher resolution screens may have been expensive in the past, they are now coming on bargain basement smartphones. 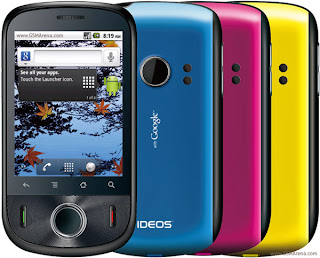 I saw an add yesterday of Smart Communication offering a Smart IDEOS Android, and offering it for free a Plan 500. This Smart IDEOS is actually a Smart branded Huawei U8150 IDEOS, offered for free under a two year Php500 per month contract. Globe Telecom is also offering this phone free at Plan 499.

This 2.8-inch touchscreen smartphone has specifications nearly identical to Samsung entry level Android, the Android Galaxy 5. The Huawei U8150 IDEOS should undercut the price of the Samsung Galaxy 5 by 10-20%, and the IDEOS actually runs Android 2.2, while the Galaxy 5 is still waiting for an update for its Android 2.1 operating system. The Huawei U8150 IDEOS runs on the same  528 MHz ARM 11 processor, Adreno 200 GPU, Qualcomm MSM7225 chipset, that powers the much more expensive HTC's Wildfire. Later this year we will see the higher end ZTE Blade and a host of other Smart branded Android smartphones and tablets.
Basically, the Google Android OS can convert the small China phone manufacturer into a contender overnight. The same Google OS which reversed Motorola's fortunes and brought HTC and Samsung to new heights will likely do the same for Huawei, ZTE and a host of other smaller manufacturers. Your next low cost China phone will be a full fledged powerful Droid.
HTC has invested heavily in customizing its Sense user interface and cloud services to create brand loyalty and differentiate it from the rest of the Androids in the market. In the same way Samsung is developing it TouchWiz interface, as pushing the limits of technology. I would not be surprised if Samsung made their latest innovations "exclusive" to their own phones for some time. But still, the larger manufacturers will be under pressure from lower priced Android smartphones from smaller manufacturers. The second wave of the Android Armies march to supremacy might be spearheaded by the ChinaDroids.
I wonder if this consideration, did not weigh on the mind of Nokia CEO Stephen Elop when he opted to go with Windows Phone 7. Windows Phone 7 would allow Nokia to retain a certain level of exclusivity. Just imagine if the upcoming Nokia N9 and it's knockoff, the Nokya N9 were both running Android 2.4.
Posted by Unknown at 1:26 PM