Motorola Xoom tablet: Why I think it is self-destructive overkill

Motorola has announced the official price for its Xoom Android tablet, which should be available before the end of the month, at US$799. I think, it is a "little" bit too much, too soon. 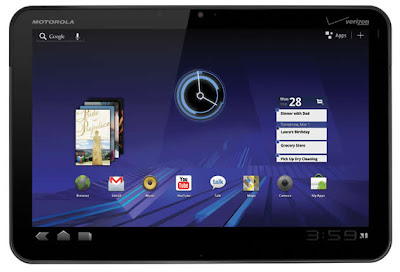 Screen: 10.1-inch, 1280 x 800 pixel resolution capacitative screen
Whether the correct screen size is 7, 8, 9 or 10 inches is a subjective thing. Different people will have different preferences. Larger screens mean greater functionality. Smaller screens mean better portability. It is the reason we have seen laptops comes with 11-inch to 17-inch screens have been built, with some offering even smaller displays and others offering larger ones. There is no one correct screen size for everybody. So there is no correct or wrong in the decision of screen size.
The screen resolution, at 1280 x 800 is a definite plus as it allows for 720p content (1280 x 720) to be played in its native resolution.
Processor: 1GHz Dual Core Tegra 2
Why do we need a dual core processor? Right now a 1GHz processor with a good discrete graphics can pretty run every app in existence, and we are wondering what super app would require this amount of power. The only reason we can think of for needing this is to allow 1080p video capture (which the Xoom does not do) and 1080p video playback (which the Xoom can do). Unless you bought your tablet as a media player to plug into your 1080p LCD TV, this feature is pretty much useless.
I certainly hope we do not need the dual core processor just to run Android 3.0. Do we really want to go back to the days (well actually it is still true today) of having to have faster hardware just to run a bloated operating system?
Camera's: 2MP front camera and 5MP rear camera
I do not see anybody really using a tablet a still camera. I would not even bother placing a rear camera on a tablet. Even if you did, the most I think you may want to do with it is stream video over the net as part of a teleconference. A 1.3 MP unit would be enough. The 2MP from cam is also over kill, a 1.3MP or even smaller 0.3. Our existing 3G and "4G" networks are not all that fast, and data is not free. Even on WiFi, do you really need to transmit that clear a picture of your face for a telecon?
Video: 720p video capture and 1080p video playback via HDMI out
The Xoom does 720p video recording. Do we really want to use our tablet as a digital video recorder. A small handheld mobile phone yes, but a 10-inch 1.6 pound tablet? I would think 720 video playback and HDMI out would have been more than enough.
US$799
The question is, if you drop one core, reduce RAM to 512MB, drop the 5MP camera all together, how much would the Xoom cost? This is certainly no Apple iPad killer, and much less a netbook killer. All the high end specifications are really bragging rights unless some killer app is developed which can justify all this hardware.
The Apple iPad sells well. The only thing missing was a front facing webcam (a netbook and laptop staple). Better resolution and a front facing camera are welcome, but there was really no need for Motorola or Google to reinvent the wheel.
No, I am not buying a Motorola Xoom for US$799? I might buy something with less features at a lower price. But lets see how many are bought. If not, by the time Motorola reorganizes their tablet specifications, the Apple iPad 2 will be cementing Apples claim up the tablet market.
Posted by Unknown at 11:52 AM