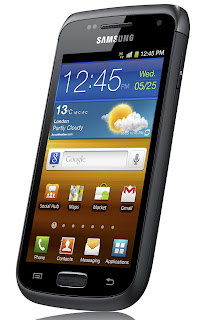 The Samsung Galaxy W i8150 was released in the Philippines in November 2011. It was a very interesting offering, but its Php16,000 price bumped head to head with LG's Optimus Black, which had a larger display, and priced below it was Sony Ericsson's Neo V. We noticed that the price of the Galaxy W has dropped to Php11,400 with an official Samsung warranty from one of the retailers who we use for price checks. This now places its price in parity with the similarly spec'ed Xperia Neo V.


Hardware wise it is superior to the now similarly priced Xperia Neo V. It has more internal storage (1.7 GB v. 320 MB), and faster processor, and a slightly better camera. The case is 1.5 mm slimmer than the Neo V. Overall I prefer the way the Galaxy W rests in my hand and like its matte finnish over the glossy finnish of the Xperia Neo V.

Some user have reported their Neo V's running a bit slower with Ice Cream Sandwich on board with some apps and some WiFi issues. A slowdown is to be expected given that Ice Cream Sandwich requires a bit more in terms of resource than Gingerbread.

With the Neo V at Php11,500 and the Galaxy W at Php11,400, its a though choice. Better hardware or running the latest operating system.