Megabolt requested I update an article posted two years ago, so here goes. 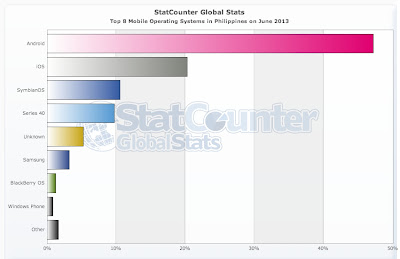 Android is now the top mobile operating system in the Philippines:

Nokia's Symbian reporting has been split into two (S40 and S60) but I will combine them for this comparison. It has fallen a lot in the past two years, and with Nokia now pushing Windows Phone, this figure will continue to fall:

iPhone/iPad/iPod has grown moderately in the past two years, but I expect it to stay at this level:


After these three, the rest hold small shares.

BlackBerry is on the decline in the Philippines:

Windows Phone is on the map (but it is a small dot):