Gartner has released data on smartphones sales to end users for the fourth quarter of 2011. 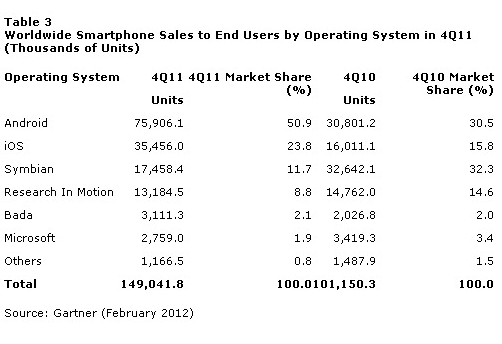 Google's Android is now firmly the top operating system with a 50.9% market share. These figures are more significant that that Apple's iPhone 4S was released in this quarter.

Symbian is down to 11.7% from 32.3% at the same time during the previous year. The lost 20% went to Android and iOS. Microsoft and Nokia are hoping that they can migrate this 11.7% to Windows Phone 7, but Nokia slow roll-out of Windows handsets is worrisome. It really is now or never, and Nokia seems to be taking it sweet time rolling out in its bailiwick in the developing world markets having focus on the United States and Europe.

So that is where it stands. Android and iOS continue to make gains. Time is running out for Windows Phone and BlackBerry.