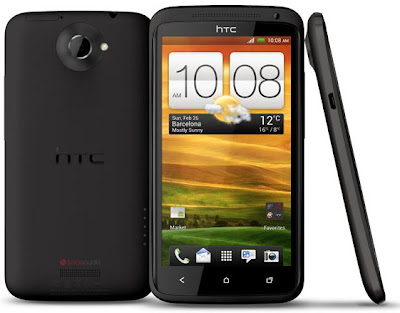 HTC new Android 4.0 flagship phone is the HTC One X. Most attention has been given to its Tegra 3 chipset with its quad core processor, with a fifth companion processor. This gives you a 1.5 GHz quad core power when needed, with a low consumption 500 MHz processor when quad core power is not needed.

The HTC One X is equally impressive outside. It comes with a 4.7-inch 720p (720 x 1280) screen, which is just a bit larger than the 4.65-inch screen on the Samsung Galaxy Nexus. Sadly, it is not a Super AMOLED display but it is a Super IPS display so it may be more impressive than we think. Since HTC decided to keep the dedicated capacitative buttons, none of the 4.7-inch screen is used for buttons making it effectively a much larger display for tasks where the buttons are not hidden on the Samsung Galaxy Nexus.

Impressively, the HTC One X is not all that much larger than the Samsung Galaxy Nexus:


It is actually a little bit shorted, but is 2 mm wider. The 2mm wider part may bother some users given that these phones are at the limits of what a personal can comfortably use with one hand.

Like all the new HTC phones, the new HTC One X is very light at just 130 grams. This makes it the same weights as the much smaller HTC Desire S. This is done in part by the use of a new polycarbonate case (same as is used in the Nokia N9 and Lumia 800) rather than an aluminum case.

The other specifications of the phone are equally impressive with 1 GB of RAM, 32 GB of internal storage and HSDPA 21.1+ Mbps connectivity. Internal storage is non expandable, but HTC does provide 2 years of 25 GB of Dropbox storage.

The One X sports an 8MP front camera, which packs a special Dual Shutter camera module, which allows you to take photos while shooting 1080p video at the same time. The camera also features 22mm wide angle lens with f/2.0 aperture. The phone also packs a 1.3 MP front camera.

Expect to see this phone on local shelves in three to four months at a price of about Php30,000. Whether is is impressive enough to fight of the yet un-announed Samsung Galaxy S III remains to be seen.