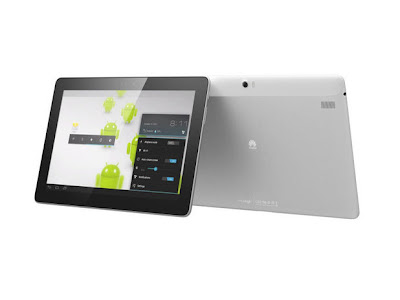 Huawei has announced a new tablet at the Mobile World Congress 2012. It is not something we did not expect, it is just we did not expect Huawei to be the one to release it. The Huawei MediaPad 10 FHD an Android 4.0 tablet which has a 10.1-inch full HD display with a 1900 x 1200 screen resolution. Inside it packs a 1.5 GHz quad core processor with Huawei's own K3V2 chipset. It also ups the ante with 2 GB of RAM. Internal storage is a modest 8 GB, but it is expandable via a MicroSD card slot.

We do expect the Apple iPad "3" to be announced in two weeks, and actually hit the market earlier than the Huawei MediaPad 10 FHD. It should offer similar specifications, with a full HD screen a quad core processor. Still, with its in-house chipset and high end specifications it looks like Huawei is not going to give up its China market without a fight, and it looks to take down some of its Android competition in the process too.
Posted by Unknown at 1:21 PM