Eight is a lucky number, and triple eight, "888", is supposedly very lucky. According to some, too lucky. MyPhone is hoping that this number is lucky for the company, and has waded into what is probably the most highly contested segment of the smartphone market with the MyPhone a888 Duo. 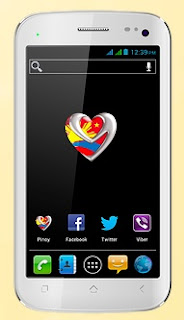 Not much distinguishes the MyPhone A888 Duo from its competition from Cherry Mobile, Cloudfone and Starmobile. The MyPhone A888 Duo has a 4.5-inch aHQ (540 x 960) display, like the Cherry Mobile Flame and the Starmobile Crystal. It has the same dual core 1 GHz processor on a MediaTek MTK6577 chipset that is used in the Crystal. Like the Crystal is has a 8MP primary camera, with a smaller 1.3MP front camera. The MyPhone a888 Duo has a 1800 mAh battery, like the Flame, which are both larger than the 1700 mAh battery on the Crystal. All have Android 4.0 onboard.

The other specifications are typical for this class of phone, with 512 MB of RAM, 4 GB of expandable storage, WiFi, HSPA and GPS.

The MyPhone A888 Duo has a suggested retail price of Php7,499. The Cherry Mobile Flame is much cheaper at Php6,299. The higher price of the MyPhone A888 Duo and Starmobile Crystal is probably due to the higher cost of MediaTek chipset found inside. The Starmobile Crystal is priced at Php7,999. It comes with a larger secondary camera, but a slightly smaller battery. On paper the MyPhone a888 Duo looks like a better deal than the Starmobile Crystal. With MyPhone long history, it is also easy to recommend. Let's not forget  that Cloudphone Thrill 430x with its 4160 mAh battery, and Php7,777 retail price.

I am not going to try to advice you which one is best. I don't have review units around to do a detailed comparison. Each is priced good enough for what they offer.  Me, the 4160 mAh battery of the Thrill 430x is just to much to pass up. For others, the slimmer and sleeker Flame, a888 or Crystal would be much more appealing. My advice is take a look at all, and see which one smiles at you.

For the money, whatever you pick, it will still be a very good deal.

Update: There is an update to this post at this link.