Three years ago a 4.3-inch smartphone was considered massive and considered to push what was ergonomically useful to its limits. Today, a large smartphone would be something in the range of 4.6 to 5-inches. 2013 sees the year when these large smartphones will really take the forefront by bringing 1080p displays to 5-inch displays. Basically, a Full HD LCD TV in your hand. While all this is compelling, lets take a look at what is in the market today. 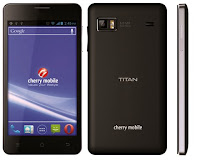 The Cherry Mobile Titan is undoubtably the best phone on Cherry Mobiles line-up. The Android powered Cherry Mobile Titan has a massive 5-inch WVGA (480 x 800) display. You will either love the phone, or look down on the low pixel density. Either you love it or hate it. But one you decide that you get an amazingly good package for Php6,499.

The phone is sufficiently powerful with a 1 GHz dual core ARM Cortex A9 processor. The PowerVR SGX531 graphics combined with the lower resolution WVGA display means fairly good 3D graphics performance. The 2350 mAh battery is enough to make up for the high power consumption of a large display.

The other specifications are the same as your typical entry level smartphone these days. The phone supports two SIM's. It packs 512 MB of RAM, a 4 GB of internal storage expandable via a MicroSD card.  At the back it has a 5 MP primary camera and a VGA front camera. It comes with Android 4.0 out of the box. All in all, nothing disappointing at this price point.

The Cherry Mobile Titan, it is amazing value for money option if you can find one. You have to spend three times as much money to get a better large phone. I have a monster Android comparison at this link comparing the Titan to its more pricey competition.

It costs three times as much as the Cherry Mobile Titan, but the for that price, you get a phone well worth the additional money. The Lenovo K860 is a 5-inch Android powered smartphone with a 720p (720 x 1280) display. A massive 5-incher is not for everyone, but those who want a monster phone will be very satisfied with the Lenovo K8860.

Inside is a quad core 1.4 GHz processor on an Exynos 4412 Quad chipset with Mali-400MP graphics. Yup, that is the same hardware as the Samsung Galaxy S3.  The impressive hardware is backed by 1 GB of RAM and a 2250 mAh battery. Internal storage is only 8 GB, but it does have a MicroSD card slot.

The Lenovo K860 has a 8 MP primary and a 2 MP secondary camera. The 8 MP camera is not on par with its higher price competition, but that is to be expected.

There are two really good reasons to select the Google Nexus 4. For Android fans, the Nexus phone get software faster and longer than other Android phones. For hardware junkies, well, with the 1.5 GHz quad core Qualcomm Krait processor and 2 GB of RAM has the most powerful smartphone hardware available. You get this all for a rather reasonable Php22,240.

So basically, if you are looking for a great camera phone, gobs of local storage and the fastest internet connectivity there are better options or the cutting edge in technology. Still it will cost you another 4 to 6K to get a better camera, more storage and faster internet.

The Samsung Galaxy S3 is widely acknowledge as the best smartphone of 2012. Being the top selling high end smartphone in 2012 is one reason for that. The hardware the another.

The Samsung Galaxy S3 has almost no weak points. It has a nice 4.8-inch HD (720 x 1280) SuperAMOLED display and a sufficiently powerful 1.4 GHz quad core processor. The 16 GB of internal storage is expandable via a MicroSD card slot. The 8MP camera is about as good as it gets. It gets small things right too. In a sea of smartphones with built-in batteries, the Galaxy S3 has a user replaceable battery. Really handy if you plan to keep the phone for two years. Samsung also bundled a fair bit of both useful and gimmicky software.

Still the phone is six months old now, and the absence of an LTE version will start making it feel older with each passing month. 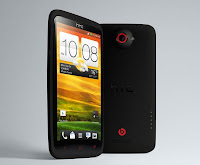 The Tegra 3 powered HTC One X has been playing second fiddle to the Samsung Galaxy S3 since the latter was released. The HTC One X+ tries to correct that with a larger battery (2100 mAh instead of 1800 mAh), faster processor (1.7 GHz instead of 1.5 GHz) and more internal storage (64 GB instead of 32 GB). The increase in battery size does a lot for battery life:

The HTC One X+ is not necessarily a better choice than the Samsung Galaxy S3. With 64 GB of storage at the same price as a Galaxy S3, it is the value for money option in this regard, but the Galaxy S3 has a batter camera, the ability to expand internal storage to 80 GB or more, and a user replaceable battery.

Like the Galaxy S3, the biggest weakness of the HTC One X+ is the absence of LTE.