Is Microsoft in Trouble?

Once upon a time the personal computer was your sole point of access to the Internet. It was your gateway to the Web, email, instant messaging, VOIP and social networking. Today, the personal computer really serves as a secondary device for those tasks, with your smartphone or tablet being the center of your online life.

What does this mean for our old loyal PC. Some users will forego the buying a laptop or desktop altogether, and rely solely on their smartphones and tablets. Others will see their PC's as either a secondary or tertiary device. The younger generation of new consumers may never buy a PC. Consumers who still consider the PC important are likely to hold on to their existing PC's longer, and when they finally replace their laptop or desktop, they are likely to buy cheaper PC's as replacements. Once you start spending less time on a device, your willingness to spend a substantial sum on a replacement also get less.

With the technology world in a state of transition, Microsoft has launched Windows 8 and RT, which mimics the interface of their Windows Phone operating system. Microsoft is relying on familiarity with Windows and Microsoft Office, well, no these days Microsoft is just relying on dependence with Office to keep it consumers within its fold.

Microsoft was hoping that its nearly 90% dominance of the PC market would lead to people buying Windows Phone. But that strategy has not worked. Two years in, Windows Phone still holds a insignificant share of the market.

Now, it seems Microsoft is hoping that tighter integration between phone, tablet and PC operating systems will lead to significant sales of all three platforms. Microsoft’s OEM partners are hoping that Windows RT and Windows 8 will get back sales lost to Apple iPad, Google Android and Amazon Android tablets, either in the form of tablet, laptop or desktop sales.

I am not going to predict whether this strategy will work or not. A unified user interface is a good idea, even if there are plenty of comments that the Windows 8 user interface is not suited for a desktop. The problem really is, the integration is skin deep. Apps are not compatible across the mobile operating system (Phone and RT) and the desktop operating system (Windows 8).

The other problem is that Microsoft is in a chicken or egg situation. With few Windows Phones in the hands of users, and few offerings in the market, there will not be all that many people taking advantage of the unified interface. So whether Windows Phone will drive Windows RT and Windows 8 sales, or it is now the other way around, is not clear. 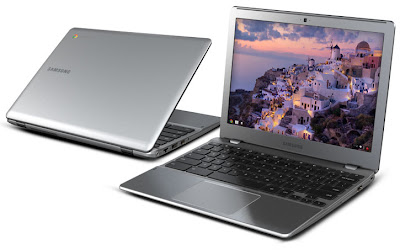 In the Christmas that just past, Amazon’s top selling laptop, was 11.6-inch Samsung's Series 5 550 Chromebook. Rather ominously, this is not a Windows 8 powered device, but rather one powered by Google’s Chrome operating system.

Priced at US$249 for the WiFi only version, and US$329 for a 3G version, this makes for a perfect tertiary device. It is inexpensive. It will also fills those gaps were the tablet it not necessarily well suited, like typing documents.  The Chromebook is not going to be useful to people who play PC games, develop software (many of whom would run Linux in the first place), edit videos or run other resource demanding, mostly business related, software. It could be a good solution for everyone else.

So while Microsoft is counting on Windows 8 and RT, to turn the tide, it looks like a new competitor has made inroads in the battlefield, and again threatens to cannibalize Windows laptop sales.

The problem looks like while Microsoft is trying to wean people off their iPads and Android phones, and bring them back into the Microsoft fold, what the consumers and small business might really want is cheap laptops, to serve as tertiary devices to their iOS and Android devices. If this is the case, it would spell trouble for Microsoft, as well as their OEM partners. Instead of selling high priced laptops and desktops, the future may be one of premium priced smartphones flanked by lower cost tablets and laptops.