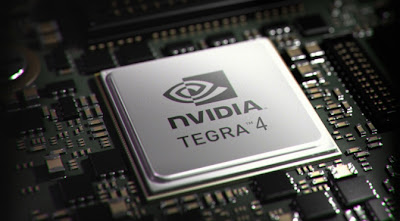 The performance of the Tegra 4 is supposedly more than double that of the  Tegra 3. But the real speed improved is in the new 72 core Graphics Processing Unit, which are said to be 6x more powerful than the 12 core GPU on Tegra 3.  The Tegra 4 also includes something Nvidia calls the Computational Photography Architecture, which is supposed to speed up camera related functions. All this is achieved while reducing battery consumption by 45%. I am not sure whether the Tegra 4 is based on 28 nanometer or 32 nanometer technology. The Tegra 3 was based on 40 nanometer tech.

All very impressive. One worrisome thing is no System-On-Chip (SoC) LTE. The Tegra 4 adds support for an optional 4G LTE modem, NVIDIA's own Icera i500 chipset. Unfortunately, this is likely to be more power hungry than SoC solutions like the Qualcomm S4.

It does not appear you will be seeing any Tegra 4 phones till Quarter 2 of this year at the earliest.
Posted by Unknown at 3:12 PM