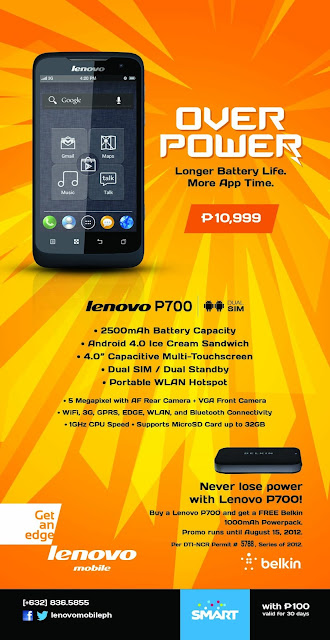 Killer features at a glance


It really comes down to those three. The screen, the operating system and the price. This is not the fist entry level Android we have seen with a 4-inch display. We do have the Cherry Mobile W900 at Php9,999 but that phone comes with Android 2.3 out of the box, and we still have no word whether it will get an update to Android 4.0 (Ice Cream Sandwich).

Next is Ice Cream Sandwich. If you got a Android 2.2 phone two years ago, it would have served you pretty well till now with software compatibility. Android 4.0 should do the same thing. Within the limits of the hardware, it will give you software compatibility with most apps for the next two years or so. In our latest smartphone buyers guide, we stopped recommending any Android phone that does not come, or upgradeable to Android 4.0.

Of course, there is the price. There are several phones in the market at a similar price point upgradeable to Android 4.0. The closest competitor that comes to mind is the Sony Xperia Neo V. But the Lenovo P700 has some features that make it a very good alternative.

It is par for the course for the price. The Lenovo P700, is a dual SIM phone. For many, that alone will make it a good choice. But actually we can ignore its dual SIM nature, and it still is an excellent choice.

The phone is powered by a 1 GHz ARM Cortex-A9 processor, with PowerVR SGX531 graphics and 512 MB of RAM. That is as competitive with the other phones at this price point. The PowerVR SGX531 graphics chip is about equivalent to the graphics of an Apple iPhone 3GS or LG Optimus Black P970. Instead of the Qualcomm, Texas Instruments or Samsung chipsets we are used to, this one runs on a MediaTek chipset. This chipset while new in the market has been found on previous Lenovo and Alcatel phones and I know of no serious issues with the chipset.

Internal storage is 4GB of which we expect about 2.5 GB user available (we need to confirm this). Internal storage is expandable via MicroSD by another 32 GB. This is par for the course with other phones at this price point. It also has a 5MP auto focus camera, a front camera and can do 720 p video recording.

Basically, there is nothing in the specifications which disappoint. So you do not make any serious compromises in selecting this dual SIM phone instead of a single SIM unit.

The battery makes it a really interesting option. The phone comes with a 2500 mAh battery. That is the same size as you find on Samsung Galaxy Note. This is a lot larger than the 1200 mAh to 1500 mAh you find in phones at this price range. This promises good battery life and could be this phone killer feature.

We have to wait for some user feedback to see how good the endurance of this phone is. But from the specifications, it looks promising. If you get the Lenovo P700 you get a 1000 mAh Belkin external battery pack making the Php10,999 price really amazing.

We have to actually spend some time on this phone before we put it on our recommend list. Still, if you are buying a phone now at this price, you should give this one a long look.