The Unwired View has another leaked image of HTC M7, which will be reportedly called the HTC One. The new shows the same design as the one posted a few days ago by evileaks on Twitter. 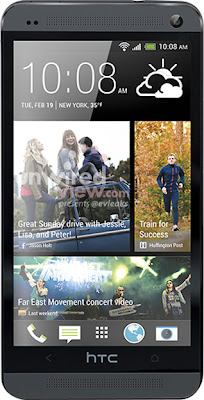 HTC has confirmed that the phone will come with a new minimalistic Sense 5 interface. The image shows edge to edge glass. The large grills at the top and bottom indicate front facing speakers. The phone also has a odd two button layout, making me guess the HTC logo is also a button.

We do know for sure that the phone will have a 4.7-inch Full HD display, which will give it the sharpest display of any smartphone in the world. The new phone will quad core Qualcomm Krait processor inside and have new Ultrapixel camera technology,