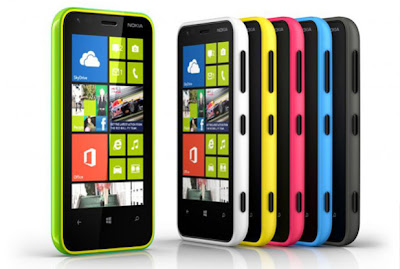 The Nokia Lumia 610 released in 2012 was priced right for the local market, but the 65K color display was not a very pretty sight.  It was too underpowered for others. Only 8 GB of non-expandable internal storage was a deal breaker for many. VGA only video recording was another serious limitation. The Nokia Lumia 610 also had no secondary camera for video calls. The announcement that Windows 7 devices would not get a Windows 8 update pretty much killed it.

The Nokia Lumia 620 has a 3.8-inch WVGA (480 x 800) display is still large enough not to be overlooked. The new displays 16 M color ClearBlack display wont disappoint.  With a dual core 1 GHz Qualcomm Krait processor and Adreno 305 graphics, absence of muscle wont be an issue this time. The internal storage is still just 8 GB, but now expandable via microSD card, with up to 64 GB cards supported.  The 5MP camera does 720p video and it has a secondary camera.

So, when do we see the new Nokia offering. This weekend

So, when do we see the new Nokia offering. This weekend. And the price will reportedly be a friendly Php11,600. This phone comes with the hardware of an HTC Windows Phone 8S, with a seriously low price. At this price, Nokia has the hardware to be a winner, if it can convince you Windows Phone 8 is as good as Google's Android or Apple's iOS.
Posted by Unknown at 3:39 PM