Linux has been a success, but has not made a significant dent on personal computers and mobile devices. It has nothing to do with Linux itself. It is a very capable operating system and is easy to use. Linux based operating systems like Android are clear proof that Linux could have been a success in all areas of computing.

So, why has it failed so far?

Microsoft has had 90% of the desktop market for as long as I can remember. Apple's Mac OSX has g between 6-7% of the market, and Linux about 1-2%. While a monopoly usually leads to strong competitor as the monopoly becomes too oppressive, Microsoft has managed to run its monopoly  in a manner that did not result in widespread revolt. In sum, the Microsoft tax is not all the bad. Microsoft Windows is available at all segments of the PC market, from fantastically priced hardware to the lowest end computers.

Even when you go to the camps of the second and third largest segments of the PC market a number split time with Windows. A fair number of Apple users actually also use Windows part of the time, as can be gleaned from the popularity of BootCamp. A fair number of Linux users dual boot. Why bother dual booting? Well really, Microsoft's hold on the Market has been about trivial things, like being compatible with all the major games titles.  Basically, on the desktop, Microsoft still has the best ecosystem, followed by Apple, with Linux being a far third place in this regard.

If you look at the mobile market, Apple was disrupted the market with an innovative. It brought a touch based operating system to the market which made the Nokia's Symbian OS, Microsoft's Windows Mobile and BlackBerry devices and operating system obsolescent. Apple's iOS had an uphill fight for a bit, with Symbian, Windows Mobile and BlackBerry having better ecosystems. But new technology, plus Apple's ability to build a large ecosystem in a short span of time killed the old guard.

Unlike Microsoft, the Apple Tax is fairly steep, hence Android arose. When you create market awareness for a new generation of products, and do not supply the entire market, well you expect this to happen.

If Linux wants to succeed on the desktop, the path to success has already been outline for it by Apple and Google.

Apple built new hardware for iOS. Google got partners to build new hardware for Android. If you had placed iOS or Android in an old touchpad or QWERTY form factor phone, Symbian, Windows Mobile and BlackBerry would still rule today.

Linux efforts have been directed at migrating Microsoft users with the ideals of software freedom, with free software and with a promise of malware free computing. This is not a recipe for success. Software freedom appeals to the idealist, and after nearly two decades of domination no one really believes that Microsoft is an evil empire that will ruin our lives. Microsoft sells software and its main goal is to keep a healthy bottom line. There are no discussions of world domination in Microsofts boardroom, just how to keep Windows on your PC. Free software is cool, until you realize few developers want to give away their work for free. Software developers have to eat too. The result, Linux has some really fine apps, just not all that many. As for threat of malware, user habit dictates as to how much risk you are in.

Linux distributors have built great operating systems. But trying to invade enemy territory is hard. For Linux to succeed it has to find a new hardware niche, a next generation computing platform, and build an operating system around that. The year of the Linux Desktop, as we know it today will not come, because if Linux is to succeed on the desktop, it would have to build a new type of desktop. 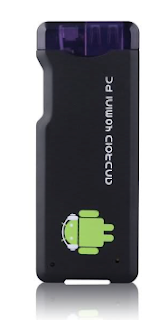 Now what this new type of desktop should be, I don't know. If I did, I would put up a hardware design company, patent a design and ship it to China for mass production. There is one new personal computer form factor that is unserved: The USB Dongle PC.

These small devices can convert your LCD or LED TV to a computer or Smart TV. Coming in as low as US$70 these devices are very interesting, but there really is no operating system which is optimized to take advantage of them. You can load Android, which is optimized for the touchscreen (which your TV is not) or Linux, which is optimized for a keyboard and a mouse (which is not all that comfortable to use when lounging on a couch or in bed).

This is just an example, and it maybe a bad one. I am no Steve Job's or Eric Schmidt. I am not sure how popular these USB PC's will be. But it would take something like this, to push a "new" operating system. Breaking new ground is an easier way to break into the consumer market, If the year of the Linux desktop will comes, it won't be on the the old clunky desktops and laptops we are all so familiar with, but some new an exciting amalgamation of software and hardware.