A lot of people, experts and common users has looked at Microsoft’s new Windows 8 operating system, many have proclaimed it to be a failure. This is not too surprising. In an industry where pundits crave innovation, the first reaction to anything new is resistance. The last major leap in desktop operating system interface was all of eighteen years ago, with Windows 95. Desktop and laptops designs have improved, but essentially have not fundamentally changed in over two decades.

So, when you look at the new Windows 8 operating system and interface, it was not designed around what you are used too.  For those old enough to remember, there was a time that people questioned the need for icons and a mouse too.

Whether you like the new interface, one thing in undeniable, Windows 8 is lighter and faster. This allows it to run competently enough on low powered chipsets like Intel’s Z2760 processor. This processor which scores just 679 points on the Passmark CPU benchmarks, really gives you little more than the power you had on your netbook, but with much better HD video and 3D performance. 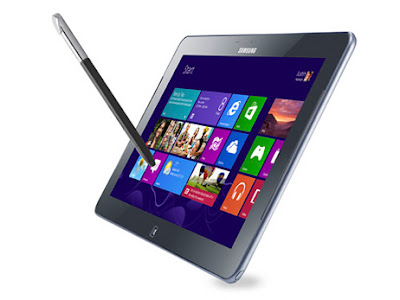 Using such a low power processor, allow place PC in a frame of a less than 10 mm thick 11.6-inch, 1.65 pound, tablet. The new Windows 8 tiled interface is designed to allow Windows to be used in tablet mode. The low powered processor also allows for long battery life, and Samsung actually claims 14 hours of battery life. In the real world, it is more like 7 to 9 hours.

Now the Samsung ATIV Smart PC 500T is a PC, and not an ARM tablet. It will run all the applications you used to run on your Windows desktop, keeping in mind the limits of the Intel’s Z2760. This software designed to be manipulated with a keyboard and mouse, is not very touchscreen friendly, so the Samsung ATIV Smart PC 500T comes packaged with a keyboard with a touchpad, and a stylus. Attaching the tablet to the keyboard dock converts it into a 3.2 pound laptop. 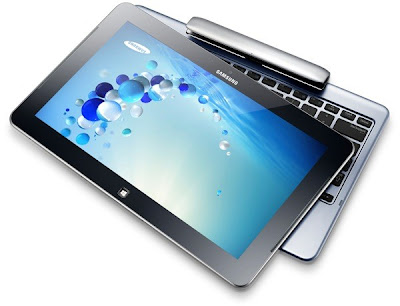 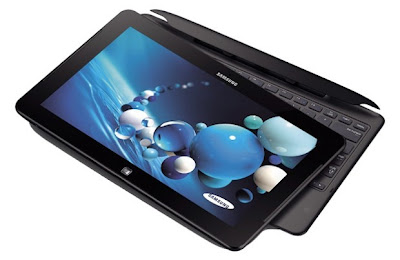 The tablet port of Samsung ATIV Smart PC Pro 700T is a ticker 12.5 mm and weighs in at a heavier 1.89 pounds. The Samsung ATIV Smart PC Pro 700T is also package with a more premium and heavier keyboard dock made of metal, which brings weight of the keyboard plus dock to a bit over 3.5 pounds. The heavier dock is needed to keep balance with the heavier tablet.

The main drawback of the more powerful Samsung ATIV Smart PC Pro 700T is that it needs active cooling to keep the Intel Core i5-3317U processor running. With a higher resolution screen, more powerful processor, double the RAM and active cooling, you can expect this to have less endurance than its lower power sibling. Samsung claims up to 8 hours. A more realistic figure is about 4-5 hours in real world use, which in line with what you expect from an 11.6-inch Ultrabook.