Chrome poised to become the top web browser in the Philippines

Internet Explorer is still the most commonly used web browser used on personal computers, based on data recorded on websites monitored StatCounter. Internet Explorer has 55% of the worldwide market. In the Philippines, it is a very different story with Mozilla's Firefox having been the top browser used in the country since StatCounter started recording these statistics in December 2008. 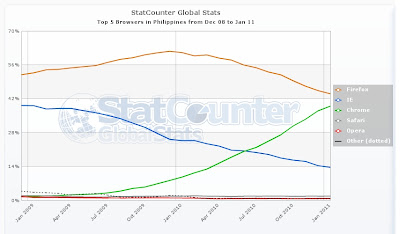 However, Google's Chrome browser is poised to take the lead. Since December 2009, usage of Firefox by personal computer users in the feelings has been on the steep decline, with Google's Chrome browser eating into Firefox's and Internet Explorer's user base. Have made the move to Chrome myself about a year ago, I can understand. It feels lighter and faster, and has a nice clean interface. 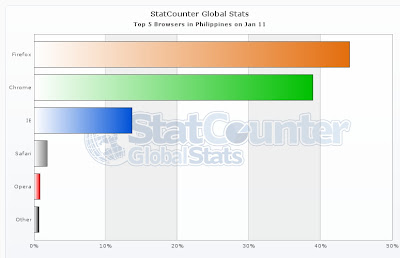