Update: We have an updated budget Android buyers guide at this link.

We have updated our list of budget Google Android smartphones. Not many changes. We dropped the units which won't be getting at least Android 2.2 (Froyo) and added a physical QWERTY option. Android 2.2 is important since it allows you to install apps in the MicroSD card and not just the main memory.

If you asked the techies, this phone is bar none, the best budget Android phone in the market. With a low Php12,490 retail price and running on the Android 2.2 (Froyo) with a Android 2.3 (Gingerbread) upgrade promised, this phone promises to both light in the pocket and to be current till the end of 2011.
It comes with a 3.2 inch TFT capacitive touchscreen display with 320 x 480 pixel resolution, which is good as you get in a budget Android. It has a 600MHz processor, 512MB of RAM and 170MB of internal storage. For the camera, it has a 3.2MP autofocus camera. Connectivity options are the expected: GPRS, EDGE,  HSDPA, Wi-Fi 802.11 b/g, Bluetooth 2.1 with A2DP, a microUSB port and as well as a built in GPS transceiver with A-GPS support. All-in-all not a bad package. What you do not get is flash support and even a operating system upgrade will not change that, the Optimus One's processor does not support flash.
2. HTC Wildfire
The other popular choice is the HTC Wildfire. It now sells for Php14,000 with an HTC warranty.

It has a 3.2 inch TFT capacitive touchscreen display with a 240 x 320 pixels screen resolution which is the main point against it. Resolution is a lower than that provided by the Optimus One. The Wildfire runs on Android 2.1 (Eclair). It is upgradeable to Android 2.2. No word yet on Android 2.3. It is powered by a 528 MHz Qualcomm processor and has 384 MB of RAM. Internal storage is 512MB. Internal storage can be increased via a MicroSD slot. It has all the standard connectivity I would need: GPRS, EDGE,  HSDPA, Wi-Fi 802.11 b/g, Bluetooth 2.1 with A2DP, a microUSB port and as well as a built in GPS transceiver with A-GPS support. Basically, the Optimus One appears to match or beats the Wildfire on all fronts at a lower price.

There are some reasons good reasons choose the Wildfire instead. It has a decent camera, a 5 MP autofocus unit with a LED flash. The led flash plus the casing and building quality makes it look and feel more like a high end phone. Also, there is the HTC Sense UI, which is our favorite UI mod for Android.

The Samsung Galaxy i5503 has adequate specifications for a budget Android. It runs Android 2.1 (Cupcake) powered by 600 MHz processor and 170MB of internal storage, which can be expanded via a MicroSD slot. It has all the standard connectivity I would need: GPRS, EDGE,  HSDPA, Wi-Fi 802.11 b/g, Bluetooth 2.1 with A2DP, a microUSB port and as well as a built in GPS transceiver with A-GPS support. It weakest point is it has the smallest screen in the bunch, with a 2.8 inch TFT capacitive touchscreen display with 240 x 320 pixel resolution. It does support multi-touch.
It really is no match for the Optimus One or Wildfire, but priced at Php9,190, and selling as low as Php8,800, it does make it a much cheaper option, and cheaper is always a good option to have. Also, we expect it to get an update to Android 2.2. 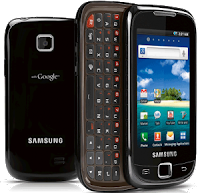 4. Samsung Galaxy 551. A good budget option for those wanting to get a physical QWERTY keyboard is the Samsung Galaxy 551, priced at Php13,490 the Galaxy 551 is a budget priced phone as Android smartphones go. It is current though, running Android 2.2 and equipped with a 3.2 inch 400 x 240 resolution screen and powered by a 667MHz processor.

The main drawback of this choice only has 256MB of RAM is less than that of the Optimus One and the Wildfire, and cannot match the graphics performance of those two units either.
Posted by Unknown at 2:48 PM