No "me too" tablets from Asus at the CES

Laptop Magazine reported on four new tablets unveiled by Asus at the 2011 Consumer Electronics Show. The first one to be released will be a 12-inch Windows 7 powered slate, which should be available this January. 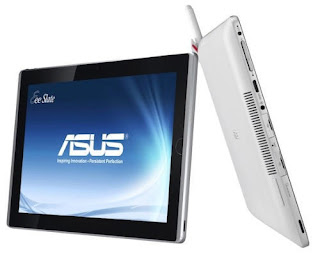 Eee Slate EP121. The Eee Slate EP121 will have a 1280 x 800 capacitative touch screen. It will be powered by low-voltage Core i5 processor and have either a 32GB or a 64GB solid-state drive for storage. The EP121 is also reported to be equipped with WiFi, Bluetooth 3.0, a 2MP camera with LED flash,  a USB port, a card reader and HDMI out. The tablet is bundled with a wireless keyboard and stylus.
This tablet will be 12 inches long and 8 inches wide, but only a bit over 0.6 inches thick. It's weight is 2.5 pounds. Given the size, I cannot imagine Asus crammed a very large battery in this thing. While there is no word on battery life, I can imagine it is below four hours. I am not sure if this slate is a tablet or more of a portable desktop. The price is expected to start at US$999.
Here is too hoping it does not have active cooling. I would hate to have an exhaust on a tablet.


I do not expect Steve Jobs to loose any sleep over this one.
ASUS Eee Pad Transformer. The next offering is not expected to be out till April. It is a 10.1-inch Tegra 2 powered Android tablet which can docked to full physical keyboard. It is similar to the Lenovo LePad  we have seen previews of the previous month. 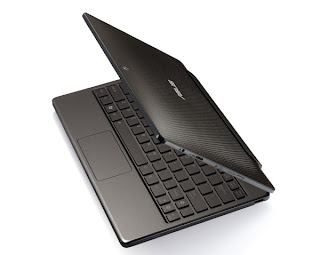 When the keyboard is docked with the tablet it can be folded open and close like a laptop. 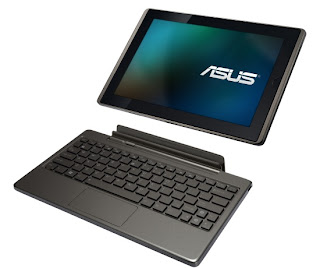 An interesting aspect in the design is that the keyboard has a second battery. The battery in the tablet is reported to power it four 8 hours, and attached to the keyboard it would have 16 hours of battery life.
A low powered netbook with a 16 hour battery life would be interesting enough. The fact that it is also a tablet is a plus.
EEE Slider Pad. In May, Asus expect to release another 10-inch Tegra 2 powered tablet. This one with a slider keyboard, like a mobile phone. 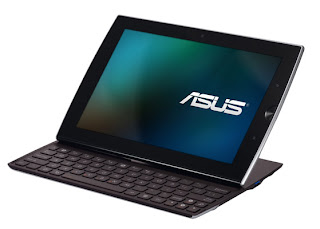 This one should weigh in at close to 2 pounds.
Eee Pad MeMo. The most "conventional" tablet Asus unveiled is reported to be powered by a dual core Qualcomm CPU Android tablet. The Eee Pad MeMo has a 7-inch screen. This tablet is bundled with a stylus. The MeMo is not expected to be out till June. A lot can happen between now and than.

The MeMo will be a full feature mobile phone with a Bluetooth earpiece for making phone calls.
There are no "me-too" Apple iPad like tablets in Asus line-up. Asus took pains to differentiate its products from Apple's iPad. I do not think that is a good thing. Only the transformer interest me in this line-up, and I do not think I would even be in line to buy that. If a got a tablet, it would be in addition to my laptop, so I really do not see what I would need the keyboard for the tablet. It is really just the 16 hour battery life, in the laptop mode, that interests me.

Tablet PC's with keyboard and a stylus have been around for nearly a decade, with limited appeal. Apple simplified the concept to create an immensely popular product. I do not think it is time to try to reinvent the wheel.


A cheaper iPad or Galaxy Tab, out sooner, would have been nice to see.