Dogfighting in X-Plane 9 for Android

I made an in-app purchase yesterday through X-Plane 9 for Android, buying the McDonnell Douglas F-4 Phantom. The F-4 cost me US$ 0.99, which while not expensive, is the cost of some other entire Android games. That purchase puts the cost of the flight simulator up to US$ 5.98 now (US$4.99 + US$0.99). Is it worth it? Yes, despite that I have reservations on the F-4 add-on, it is worth my US$0.99. 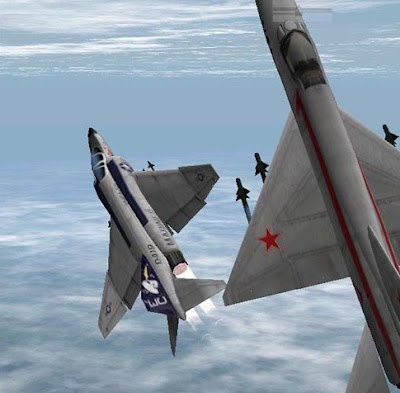 I have to issues with the F-4 add-on. First there is no dash board cockpit view, just the virtual cockpit. The second is the combat. When I bought this plane I was with the warning that:
"Other planes in the sky will attack you! You can however shoot back!"
My complaint is that you cannot select whether you want or do not want to engage in a dogfight except by selecting the Region. If you select the San Francisco map than you can just fly the F-4 as a pure civilian flight sim. If you decide to fly the Phantom in any other map other than SF, than a dogfight is mandatory. It would be preferable if combat was optional even if I selected a different region.

Dogfighting in X-Plane for Android is so-so. You cannot pan your head around, which is a must for a flight combat sim. Basically you are left with following a green indicator box on your HUD which tells where the enemy plane is relative to your plane, without knowing what direction he is going or what action he is taking. The map view will also show you the location of the enemy plane.
For weapons you have AIM-9 sidewinders and the 20mm cannon are available for use. Given that the F-4 in the sim is a Marine jet, it would be either an F-4B, F-4J, F-4N or F-4S. This means it should not have a 20mm cannon.

There are no radar guided weapons provided, which removed the need to have a procedure on how to lock-on to a target. The AIM-9's appear to be of the newer all aspect variety, so there is no need to get behind the enemy plane to acquire a heat signature. I am not sure how many times I have shot down the enemy jet and how many times he crashed on his own so I cannot confirm this. The AI of the enemy plane is a mixed bag, sometimes tough, something it crashes without any intervention on my part.


It is okay to have a dogfight option, I just wish turning it off was not region dependent. I am not sure what dogfighting is like in the desktop version, but I doubt if it be like Falcon 4 or Flanker 2. Basically, I guess I feel like an arcade like aspect, basically because of the weapons, was brought into my rather serious flight sim.
The purchase of the F-4 also gives you carrier take-off's and landings. If you select Honolulu, Hawaii, once you complete the dogfight, you will be given instructions on carrier landing.


While X-Plane for Android had the lowest cost of entry at US$4.99 cents, paying for each plane or region at US$0.99 costs more in the long run. iOS users buy them by packages, and if you want everything, it comes out being much cheaper for iPhone, iPod and iPad users.
For my US$ 0.99 cents, I got dogfights  and carrier take-off's and landings. Not bad for US$ 0.99. Adding all the aircraft and regions will make this sim rather costly, at a total cost of US$59.44. I will have to make prudent decisions on what to add-on.