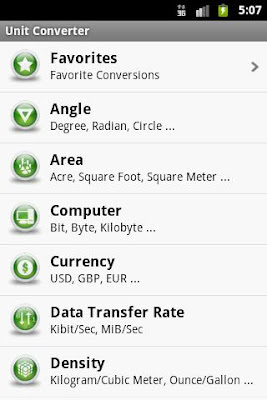 Wopnersoft's Unit Converter is actually both a unit and currency converter. I chose use the free version. There is a even more powerful Wopnersoft Unit Converter Plus with more currencies (165 countries v. 60 countries in the free version) and the ability to create custom units power users.  In fairness, all the apps I tried were good, what decided me on keeping Wopnersoft's Unit Converter was that I would have one app to do two jobs, and the ability to save shortcuts your favorite conversions (in my case Philippine Peso to U.S. Dollar, mm to inch, gram to pounds and kilograms to pounds) makes the app the easiest to use.
Posted by Unknown at 4:01 PM