My HTC Desire HD's Sence UI comes with a better than average keyboard. It even has a Compact QWERTY option. Where is really falls short is the dictionary. Many words seem to be missing from the dictionary. It does allow new words to be added, but that does not solve its shortcoming. It will often predict a word in the plural, before the singular. This forces you to type the entire word, less the "s". Worse, it adds some of your typos into the dictionary so I regularly clean up my dictionary.

So after four months I decided to try something else. 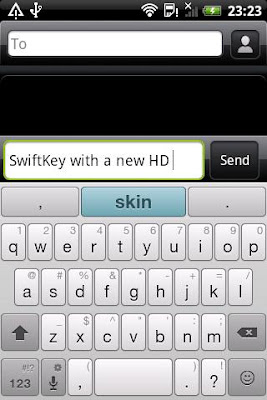 SwiftKey from TouchType was very well regarded. I was sold in a few minutes. Word prediction is amazing. Not only does it predict the word you want to write from the first few letters you type, it predicts the next word based on the previous words you typed. It also learns your typing habits and gives you suggestions based on what you have written before.
The other place where this app works is that it uniformly shows you only three three word suggestions by default, which is actually more useful than seeing more options. Instead of a different number of suggested words being shown in different configurations on the screen, limiting it to three, which are always found in the same place on the screen results, is much more intuitive.
It is a paid app costing Php87 local, but there is a 31-day demo and a Beta version which you can use for free. Buyers of the current version get a free upgrade to the next version.
Is this the best keyboard? I do not know. I have used Swype, and can imagine that  many would prefer Swype. There are other well regarded keyboards in the market. But I am sticking with Swiftkey. Since I have been using it, I type faster have zero typos. Yes, zero typos. Basically, there really is nothing more I want, so it give me no reason to look at anything else.
Posted by Unknown at 11:57 PM