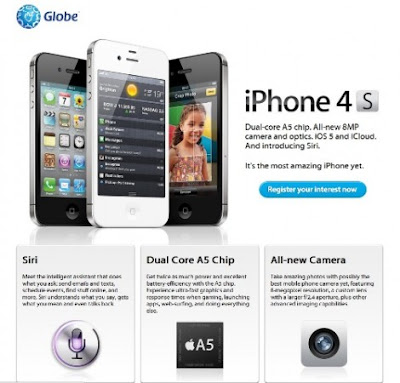 Globe Telecom is now offering both the Apple iPhone 4S and the Nokia Lumia 800 to its subscribers. The iPhone 4S runs on iOS and comes with iCloud. The Lumia 800 runs on Windows Phone 7.5 with Sky Drive for cloud storage. These two phones are similar in terms of size catering to those wanting a mid-sized phone. Both phones are also offered free at Globe's Plan 2499. With similar sizes and pricing, the phones directly compete with each other. Which of these two mobile is best for you?

Winner: Draw. While the higher of the iPhone 4S is great, the larger display of the Lumia 800 is actually more functional in my book.

Power. The iPhone 4S is powered by a dual core 800 MHz Cortex-A9 processor,  PowerVR SGX543MP2 graphics processing unit and 512 MB of RAM. The Lumia 800 has comes with a single core processor, though clocked at a higher 1.4 GHz, with Adreno 205 graphics an 512 MB of RAM.

Winner: iPhone 4S. While the faster single core may actually be faster than the lower clocked dual core in some tasks. The PowerVR graphics of the iPhone 4S is faster than the Adreno graphics of the Lumia 800. In the end it really does not matter, both phones and their software being optimized for their hardware. Still we would give the edge to the iPhone because it can do 1080p video recording and playback, while the Lumia 800 is limited to 720p.

Winner: iPhone 4S. It can recorded higher quality video and does a better job on still too.

Connectivity. In this regard both phones disappoint a bit, since they support circa 2010 HSDPA 14.4 Mbps connectivity and not the faster HSPA+ 21,1 Mbps standard you see on the top Android phones.

Social Networking Integration. The iOS 5 on the iPhone 4S integrates Twitter into the OS. Windows 7.5 on the Lumia 800 integrated Facebook, Twitter and LinkedIn in its People Hub (i.e. Contacts). You can even create Facebook "Groups" in the People Hub to better manage your FaceBook updates/ FaceBook Messaging is even integrated into the Windows 7.5 SMS application.

Winner: Lumia 800. Windows Phone 7.5 leads all when it comes to Social Networking Integration.

Navigation. For Navigation the iPhone 4S relies of Google Maps and Navigation. While this is great, it lacks two things. It does not work with 3G active and it does not offer voice guided turn-by-turn navigation in the Philippines. The Lumai 800 comes with NDrive which works just using GPS and is voice guided.


Summary. Ultimately the iPhone 4S offers more better hardware and more apps, although it is really only in gaming where the more apps counts, The Lumia 800 offers better social networking and navigation .

Globe seems to be positioning the iPhone 4S as a much better choice at the Unli Surf Combo 1799 and 2499 plans where it won't cost you more than a Lumia 800. On My Super Plan, or are at Unli Surf Combo Plan 999 the Lumia 800 comes in 10K+ cheaper and becomes a better value for money proposition.
Posted by Unknown at 11:05 AM