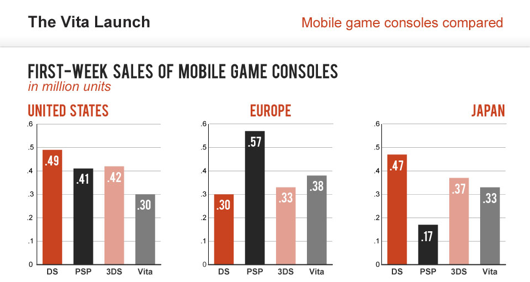 The first week sales figures of the PS Vita are out, and while Sony tries to keep a straight face, the figures should worry them.

Still it would be hard for Sony to see Europe as a growing market. The Sony PSP did much better in 2005 as against the PS Vita in 2011. Basically, sales are about 40% lower. The Sony PSP sold better both in Europe and the USA in its first week as compared to the PS Vita.

Sony PS Vita first sales in December 2010 in Japan were much higher than December 2004 Sony PSP, but Sony can take little solace in that. Sales in Japan tanked after that. More PS Vita's were sold in Japan in the first three days than in the two months after that.

Sony should look at the PS Vita as their last foray into the gaming console market and start building a 7-inch gaming tablet and build large screen smartphones, and port their Play Station network into those devices. Or maybe better, it may be time to port their PlayStation Network to Android and maybe even iOS. If the marker is bad now, wait until Microsoft gets serious on Xbox on the phone and tablet, and Google Play may mean more than a new storefront.