There is no truth to the death of the PC, but its days of dominance are over

With the imminent launch of the next iteration of Apple's iPad, rumors of a smaller and cheaper iPad Mini, Google's own plan for a low cost Nexus tablet and the arrival of Windows 8 tablets by the end of the year, the debate about the end of the PC abounds

What is a PC. The PC or Personal Computer is a desktop or laptop which run on the x86 architecture, and running processors manufactured by Intel, AMD or Via.  The was a time when all personal computing would be done on a PC. But times have changed. Smartphones over the past decade have become more capable, allowing a user to do some or all of the tasks which used to be done on a PC. Than came the tablet, which is essentially a smartphone with a larger screen. The larger screen alone makes it a more functional device. All this means less reliance on the PC.

So how will this affect consumers and what they buy. Looking around at my small circle of friends would reveal some things. I know a couple who have not used their PC much since acquiring Apple iPhone's. Their netbook is now pretty much the exclusive domain of their son, who still uses a feature phone. A decade ago, this would have been a three PC family. With smartphones, I think this three member family will remain a one PC family. They still use PC's in their work, but this are company supplied machines. 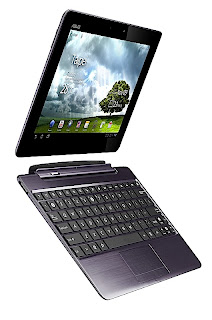 Another friend of mine will replace her ageing netbook with a Asus Transformer Prime, which is a tablet, which with a keyboard dock will bring PC like functionality. She will use the ARM powered device both for work and at home.

In my case, I will stick to the PC and the smartphone for the foreseeable future. I blog. I need a physical keyboard and I find the physical keyboard on devices like the Asus Transformer Prime cramp.  Basically, I do not see a tablet in my future. But even I will be buying less PC's in the future. In the past, I have relied on a small ultraportable to carry around and a desktop replacement when I am not on the road. With ultrabooks, or in my case, a MacBook Air, the 13.3-inch MacBook Air is big enough to be my desktop replacement, and at a tad under 3-pounds, is light enough to be my carry PC.

So, just considering five people, it looks like there is a loss of four PC sales.

Tablets have a lot going for them. There is portability. The world has gone mobile and lighter devices are easier to carry around. A iPad at 1.3 pounds is almost half the weight of an 11.6-inch MacBook Air. For people who don't use the keyboard much, why carry one around?
Manufacturing costs of tablets also seem to be lower than PC's. Low cost tablets are now available for price points that netbooks never attained. Remember, that netbooks only dropped down to their current price point after Apple iPad came out. The last netbook I bought, about three years ago, cost me as much as buying an iPad today.


The PC is not about to die. Plugging in a keyboard dock to a 10-inch tablet will not satisfy those who want a 13-inch or larger display. Some will want even larger 18+ inch displays so the desktop will live on. But there is more competition, and they will have to share the computing market.

There is another threat, not to the desktop or laptop form factor, but to x86. The keyboard, trackpad and mouse will live on, but with Windows 8 becoming ARM compatible, your next "personal computer" might be running on ARM processors rather than x86.

All this does bring in more competition, which for the consumer is a good thing. MacBook Air's prices have pretty much been halved, and other manufacturers are "converting" their high priced ultraportables into lower cost ultrabooks. Tablets are getting cheaper every few months.


More smartphones and tablets will mean more competition for PC's. But to not lament the end of the dominance of the PC too much. This competitive ecosystem will mean more people will have access computers, and those willing to spend more will get more premium devices for their money.