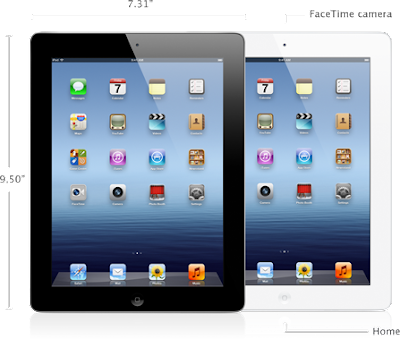 Apple has announced the next iteration of its iPad tablet, the Apple iPad. No, it is not called the iPad 3 or iPad HD, just iPad.

The main draw of the new iPad is it's higher resolution 2048 x 1536 pixel "retina" display. This is actually just 264 pixels per inch and not the 326 pixels per inch you get on an iPhone 4 or 4S. But I really do not think anyone is going to notice the difference.

Connectivity has also been upgraded to HSDPA+ 21.1 Mbps/DC-SHDPA for international unit while US version will also be equipped with 4G LTE.  The camera  is also improved, now with 5 MP primary camera with 1080p video recording. It uses the same optics as the camera on the iPhone 4S, which has a pretty good camera.

We wont be seeing the rumored quadcore A6 processor on the new iPad. Instead it has the A5X chip. This uses the same dual core 1 GHz Cortex-A9 processor as the iPad 2, but the graphics chip  is upgraded to a quadcore PowerVR SGX543MP4 GPU.

For those hoping for Siri, Siri is not available on the new iPad, but it does have voice dictation. Voice dictation is available in English, French, German and Japanese.

The new iPad at 9.4 mm and 1.44 pounds, is a bit thicker and heavier than lasts year model, but not by much.

All in all, it is a pretty impressive package. Some will be disappointed with the absence of Siri or a quadcore processor, but most expectations were met. Isn't that good enough?