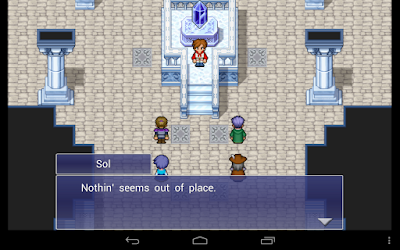 After nearly three months, I have completed Final Fantasy Dimensions after over 84 hours of playing time (not counting retries). Square Enix roles playing game is not cheap, at US$19.99 at Google Play and on iTunes. Still it is worth every cent.

The 2-D pixel art is not state of the art 3-D, but after awhile, you get used to it. One you do, it does not really detract from game play. The game runs nicely on an old device with a 1 GHz single core processor and 768 MB of RAM.

What makes the game compelling is a decent enough storyline and very interesting jobs system. In terms of storyline, I think it is the first one which matches Symphony of Eternity.

The jobs system will probably ensure that you will want to play this game at least twice. The trick here is probably to have each character master just two jobs, and have a good combination of jobs across your eight characters.

The game is well balanced. Your party will be vanquished from time to time, but it is not so difficult as to become frustrating. I actually, have two more RPG's which I still have no got around to playing, Final Fantasy III and Kemco's Silver Nornir. Most likely I will give Final Fantasy Dimension and second go before moving on.

If you like playing JRPG's on your mobile, this is a much have.

How do I rank them?

Final Fantasy Dimensions - The best I tried so far.

Symphony of the Eternity - This game is the standard for many, as to what makes a good mobile JRPG. I would rank Final Fantasy Dimension a few notches higher.

Symphony of the Origin - Not as deep as Symphony of Eternity or Final Fantasy Dimensions. But this makes the best choice for those new to JRPG's with its simpler battle system and the more modern graphics makes it more pleasing to the eye. Final Fantasy Dimension has more substance to please the more avid JRPG gamer and will give you four to five time more playing time.

Chaos Rings - This game has much nicer graphics and four parallel story lines. After completing two I lost interest. Still in terms of cost versus hours of enjoyment I got my moneys worth. Not as good in my opinion as Eternity, Origin or Dimensions.

Eve of Genesis - Decent enough, but I guess it comes out as my least favorite. Still well worth what I paid.