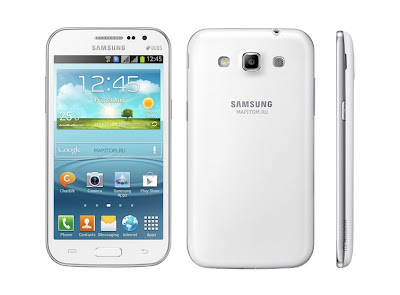 Samsung has released a new handset in the Philippine market, the Samsung Galaxy Win i8552. The new offering is a mid-level dial SIM Android which I found selling for as low as Php14690 with an official warranty.


The new offering is interesting enough. It is powered by Qualcomm's entry level quad core chipset, the S200. This humble chipset will be enough to push past 10000 AnTuTu benchmark points. Basically, fast enough for most people. The main issue for some will be that the Qualcomm S200 limits video capture to 720p.  For the money, it would have been nice to at least have a higher resolution qHD display.

At almost 15K, this phone faces some stiff competition.

The closest direct competition for the Galaxy Win is probably the Php7,990 Cherry Mobile Skyfire 2.0 which has a 4.5-inch qHD (540 x 960) display and the same Qualcomm internals as the Galaxy Win.

For those looking for a ultra stylish handset at the price. the 6.5 mm thin Alcatel One Touch Idol Ultra sports a sharp 4.65-inch AMOLED HD (720 x 1280) display. This is certainly the most stylish phone available for P13,990.

The Galaxy Win is a nice enough phone. But in my opinion you do pay a premium price for the Samsung branding. Still, I think this phone will be a "Win" for Samsung. It will sell well. It looks like a Galaxy S III or S 4, has dual SIM capability and most importantly, for the typical consumer has Samsung branding.