HTC to launch One S, Desire V and Desire C in the Philippines

HTC Philippines, in its Facebook page, has announced the launch of the HTC One S and a pair of new HTC Desires on June 29, 2012. 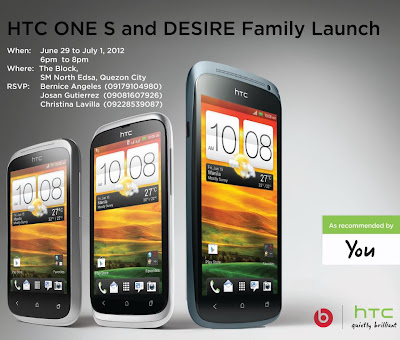 The HTC One S, pictured on the right has is a slim 7.9 mm thick phone with a large 4.3-inch Super AMOLED qHD (540 x 960 pixel resolution) display. Two variants of the HTC One S exist. One is equipped with Qualcomms S4 with a 1.5 GHz dual-core S4 Krait processor. Because of shortages of the Qualcomm S4 a second version of the One S was released with a Qualcomm S3 with a 1.7GHz Scorpion processor. The version to be released in the Philippines is likely to be the less desirable model with the Qualcomm S3, but keep your fingers crossed.

The phone in the middle is most likely the HTC Desire V, which has a 4-inch WVGA (480 x 800 pixel resolution) display and single core 1 GHz processor ARM Cortex A-5 processor. The main draw with this phone is its dual sim function.

The phone on the far right is the HTC Desire C which which has a 3.5-inch, 320 x 480 pixel resolution display. Inside is single core 600 MHz processor ARM Cortex A-5 processor. We expect this to be priced below the HTC One V, so the retail price will be below Php15K, and expect its street price to be in the Php10-12K range,