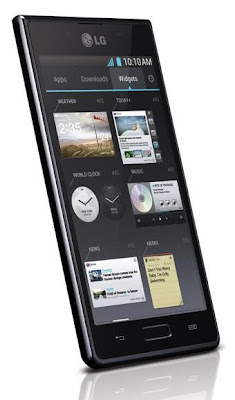 Yesterday we took a look at the Sony Xperia Sola, which comes with the new NovaThor chipset, dual core processing and fast graphics to the mid-level. LG has a new Android offering which surprisingly uses updated 2010 technology, packaged with other hardware that makes it an interesting enough offering.

Inside the LG Optimus 7 P700, you have a 1 GHz Snapdragon Qualcomm S1 processor, Adreno 200 graphics and 512 MB of RAM and a 5 MP autofocus camera with a LED flash. This is similar to what you might find on a Nexus One from early 2010. The older components are built on a newer chipset and the Adreno 200 graphics has been enhanced. The phone also has a front camera.

Even considering the hardware is less than stellar, we were still surprised that the video capture is limited to VGA video capture. Flash support in the web browser is also limited. We are guessing this has something to do with the choice of a Qualcomm S1 processor.

But LG has wrapped the less than stellar hardware in a very interesting package. The LG Optimus 7 has a 4.3-inch IPS LCD display with a 480 x 800 screen resolution. That screen is held in a light 122 gram case which is all of just 8.7 mm thin. Inside, you have a decent amount of internal storage at 4 GB (2.6 GB of which is user available). The internal storage can be expanded using MicroSD cards, with 32 GB cards being supported. Behind all that, you have a fairly impressive 1700 mAh battery.

The LG Optimus 7 also comes out with Android 4.0, Ice Cream Sandwich, out of the box. All-in-all, not a bad packed for the suggested retail price of just Php15,990, and we expect street prices could be all of 1K under that.