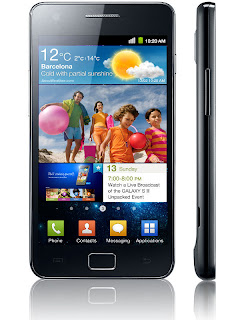 Engadget reports that Samsung has sold 3 million of its i9000 Galaxy S II phones in the fifty-five days since its release. This is Samsungs fastest selling phone ever. Given that the Galaxy S II has still to be released in the United States we expect it to continue is brisks sales and go beyond that 10 million Galaxy S phones Samsung sold in 2010.
GSM Arena has a first look at the upcoming Samsung i9103 Galaxy Z. Basically, it will be a cheaper Galaxy S II with a slightly smaller 4.2-inch SLD screen instead of the the 4.3-inch Super AMOLED Plus screen on the Galaxy S II. The other specifications are also downgraded as against the Galaxy S II, with the Gaalxy Z a 1GHz NVIDIA Tegra 2 AP20H Dual Core processor, 8GB of internal storage and a 5MP camera. When the Galaxy Z is offered here we expect it to be priced at around Php22,000 to Php24,000, based on the pre-order prices in Sweden. This will be bad news for LG's Optimus 2x and HTC's Desire S.